OMG Now THESE are MOUNTAINS!

California's Sierra Nevada are formidable, Colorado's Rockies unmatchable. And the rocks of Southern Utah are world-class. But somehow, the Dolomites are in a whole different category. These mountains are the stuff of legend and fairy tails.  The grandeur of these massive snow-dusted cliffs is unimaginable, even after we've been here for three days. 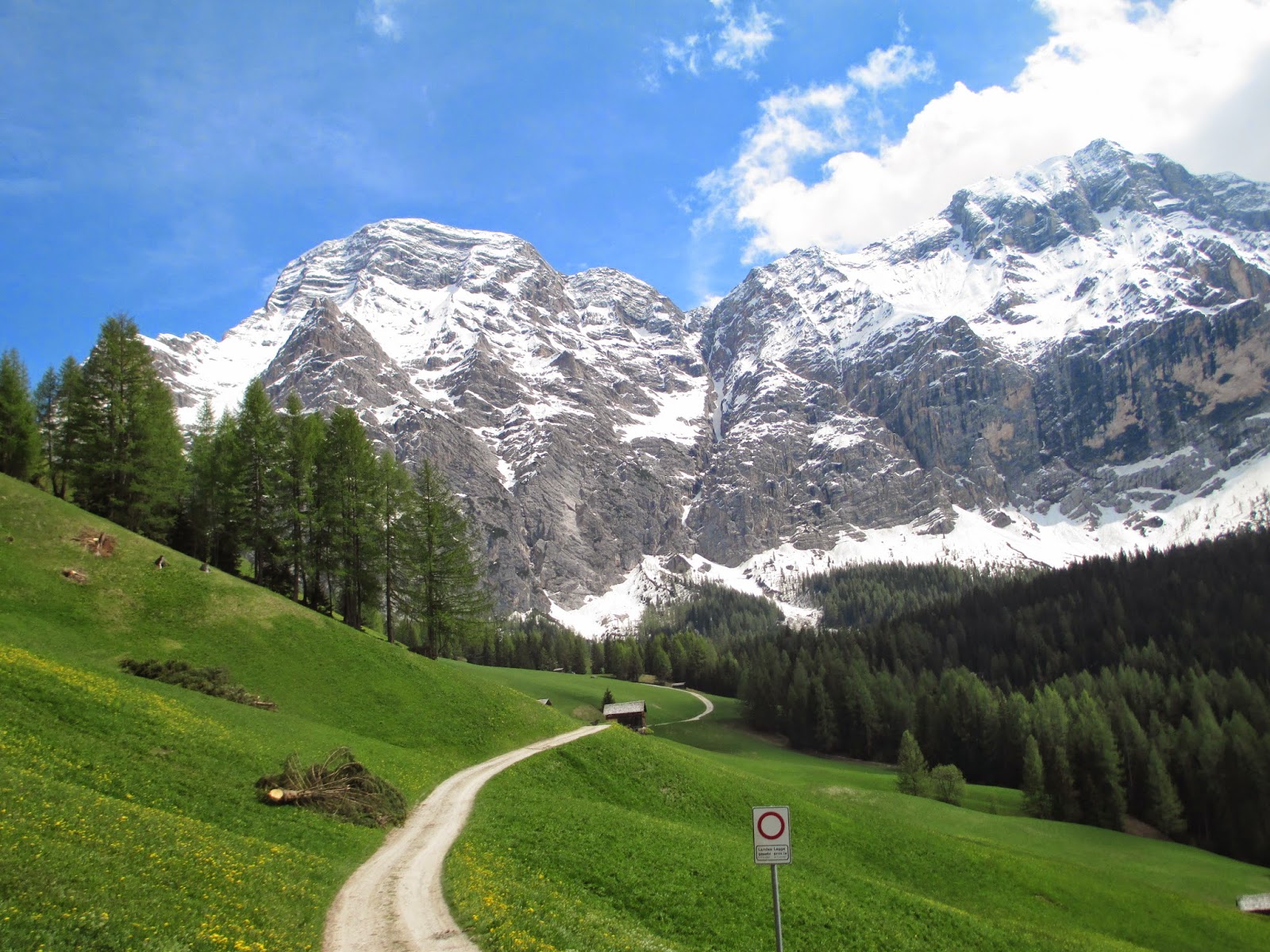 The narrow, winding, single-lane roads, impossibly steep, are mostly empty during this "in-between" shoulder season (not enough snow for skiing, too much for high-altitude trekking). The hills are alive, green and yellow with dandelions. The mountains... The mountains tower over everything, a constant presence. 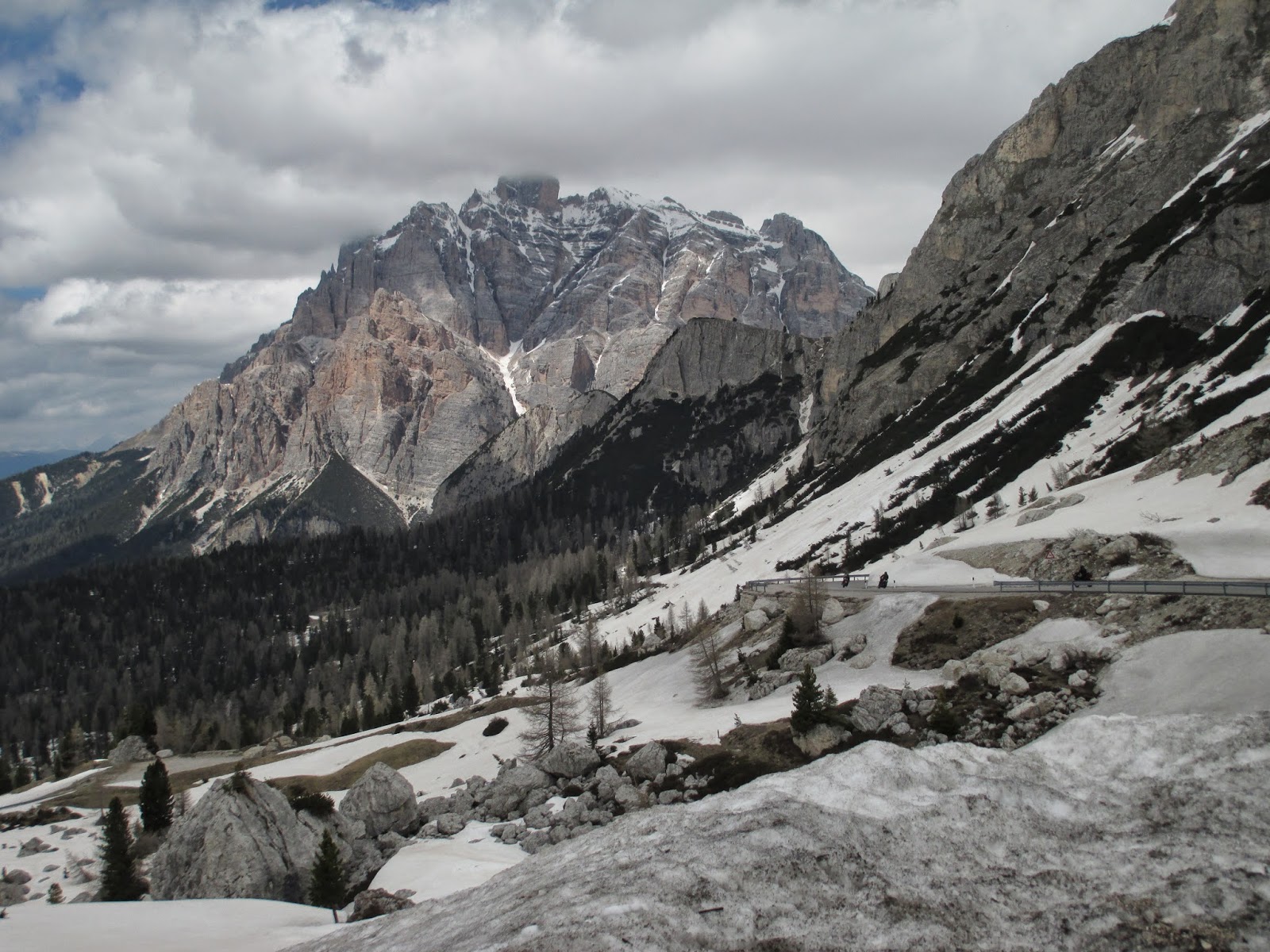 We've been hiking yesterday and today, and were constantly stunned by the postcard-perfect views. Distant villages framed by massive cliffs, and surrounded by endless green meadows covered with yellow flowers.  We expected Heidi to pop out at any moment. 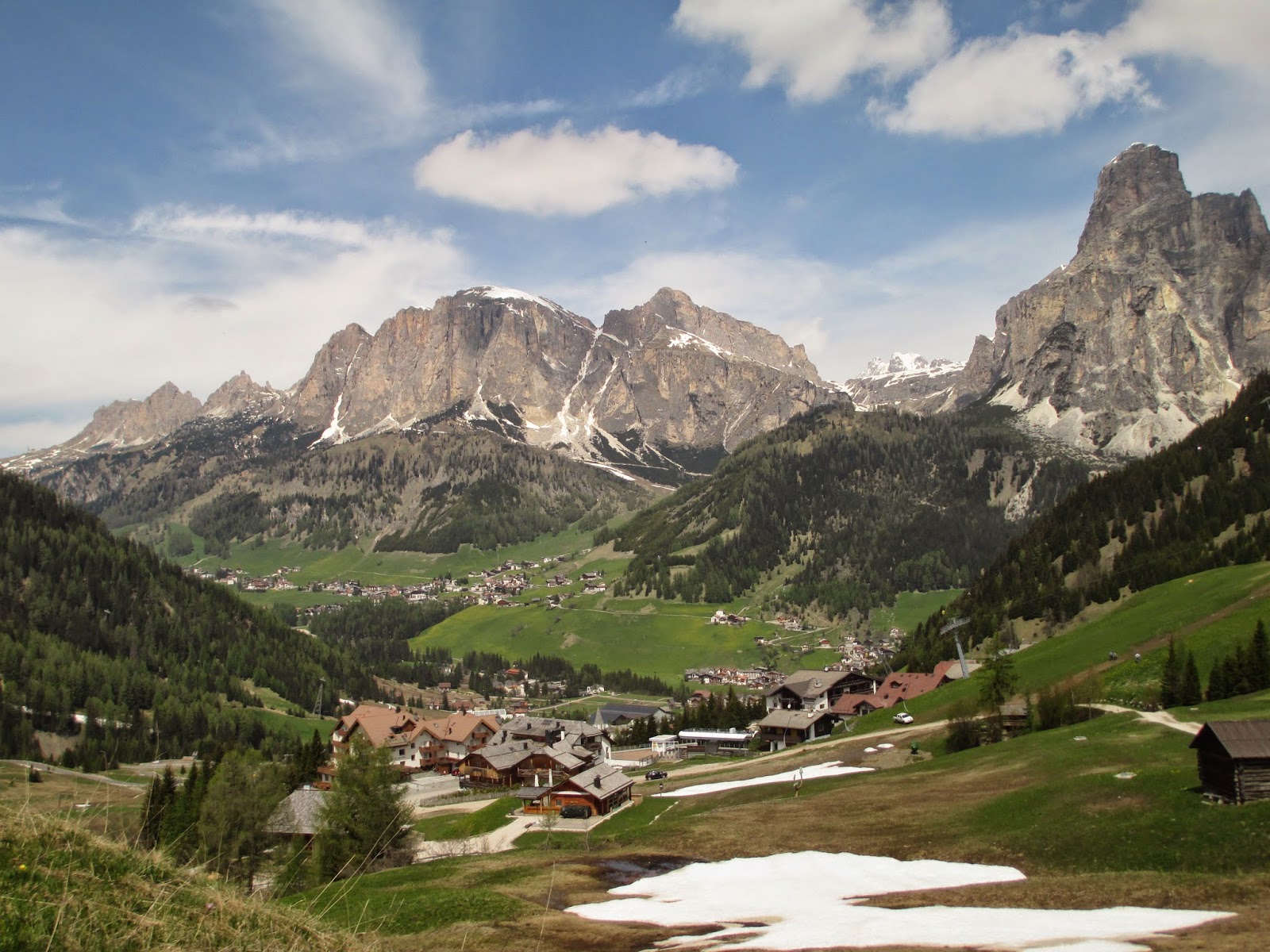 The Italian villa estates and European gardens have given way to Alpine chalet-like houses, with window boxes of geraniums and petunias. And, German is widely spoken here (prior to WWI, this was part of Austria!).

But, Oh My! We've almost forgotten the lake! Here it's only been a few days and the wonders of Lago di Garda have been all but forgotten!

Lago di Garda is Italy's largest lake, and its long, long shore is lined with cute village after cute village.  We did not stay on the lake but rather in a village (also cute!) a bit above the lake. Paula found a private house to stay in through AirBnB. When we weren't relaxing with Leone in his beautiful garden we were climbing through the hilly streets of the village. We took the ferry across the lake and back, and drove around a good bit of the lake. It is quite lovely.

We spent one afternoon north of the lake, in the town of Arco. Its not so cutesy as the lake villages( it's a real town not just for tourists) , but the old town is picturesque.  We climbed, calves aching, to the 11th Century castle overlooking the town for the fantastic views. (The exercise was good, too!).


Tomorrow we will move west, technically out of the Dolomites but still in the mountains. Then in a few days we head south, back to the lake region, this time to Lago di Como.

Which is better? Mountain or lake? We'll let you know!

So much, so fast!

We're in Calabria, on the west coast of Italy, well south of Naples. Calabria is very hilly; most of the towns here are quite vertical.  Today we visited the celebrated statue of Christ the Redeemer, some 500 meters above the ocean, looking over the town of Maratea.  The road leading up is amazing, but no less so than the Italian drivers: the whole way up we were dodging cars parked in the right lane. This poses a challenge, since the road is exactly two lanes wide,  with the edges defined by low stone walls; which means we spend a fair amount of time in the left lane, on these steep short switchbacks. Oh well, everybody here just expects to meet another vehicle in their lane coming around a corner...

The main highway along the coast is not bad, very similar, we've been told, to the Amalfi Coast but less busy.  In fact, things are relatively slow here, in this tourist center. It's starting to gear up for the big months of July and (especially!) August, when half of the population of Northern Italy will be down here. Shops are opening, vendors are putting out their best "Produtti locali", and the beaches are getting cleaned up for the big rush. Now, though, its quiet, green, and cool.

We drove through Basilicata,  from east to west. Incredibly green, with each of the many mountain peaks crowned by a village spilling down the sides. The roads into towns are tight, often only a single lane (fortunately, not much traffic!); then once in town, it gets worse. Steep, sharp turns, and shear stone walls on both sides. Sometimes we fold the mirrors in for adequate clearance (and we've got a small Fiat!)


It was only a few days ago, but impressions are coming so fast we've almost forgotten Puglia: the impossibly Rococo buildings of Lecce, the huge gnarled ancient olive trees, the pointy roofs of the truilli houses of Alberobello; the fine, fine olive oil served everywhere; the ancient port city of Monopoli (no connection with the board game) where we met the French couple who've spent the last seven years cruising the Med on their sailboat. Wild flowers in the fields; those red red poppies are still our favorite. Standing on the rocks at the very stiletto tip of the heel of Italy, with the Ionian Sea to the left, and the Adriatic to the right. (Or was it the other way around?). Was this where the Sirens called to Odysseys?

Tomorrow we head further south; we're looking forward to see the Straits of Messina, at the very tip of the toe. Then it's another plane flight back to Milan, and two weeks of Northern Italy. We're expecting a bit of a contrast!

After a long day of driving down the coast from Praia a Mare, with a few stops, we arrived in Pizzo, where we were to spend 2 nights. It's only a hundred kilometers or so, and a few hours, but this is Italy, with a surprise around every corner.

Anyway, we are finally in Pizzo, and we call our host. No go. The number doesn't work. Put a 1 in front. A 0. A space. Nothing. The email from that morning says, "call me when you get to town, I'll meet you in the Piazza." That's a bit vague, and anyway, we can't call. Stress levels notch up.

We arrive in town, ask directions to the Piazza.

We finally get parked and walk back to the piazza. We'll get some WiFi at a cafe, says Paula, and email Franco, our host. There are many cafes in the piazza. We walk slowly along. Paula says, that one! We go in.

The proprietor is jovial. I ask for a coffee (always a good way to start, I figure; put our relationship on a sound business footing.) We ask about the phone number. "Oh, that's in London! But we have the second best gelato in the world, " the owner assures us, with a jovial laugh.

London?! Paula shows him our paper, with the number. He sees the name. "Oh, I know Franco! He's crazy! Here, let me call him for you! Yes, he'll be here in five minutes! Now take a seat and I'll serve you some of our famous gelato. "

So we do, and he does, and this gelato is incredible. Like a lava cake, with a liquid center, but ice cream. And chocolate to live for! We dig in, and a moment later Franco shows up.

And we are left wondering, once again, how is that things can go from the pits to the peaks in moments?

And God answered: It's called Grace (and magic!).

OK it's been awhile, but we are still alive....

This simple statement elicited looks of incredulity, and peals of laughter, from our Spanish AirBnB hosts. We'd been talking about dinner, and eating habits. The Spanish, you see, like to eat late, like around 10 or so. Dinner at 7? Impossible! "What do you do for the rest of the evening?" they asked.

We slowly acculturated to Spain, but that part of our trip is over. We flew back to Milan and leave in a few hours for Puglia in the south.

Its been a bit of a buzz, but we wanted to get a sense of what Spain's coast was like. And we did. We've driven from Tarifa in the south up the Costa del Sol (totally overbuilt; even the outskirts have overbuilt outskirts) through the Costa Blanca (only a little overbuilt, with some relief in the high rises given by the many greenhouses of industrial agriculture).

There were some areas about 50 km south of Barcelona that seemed like the original, authentic Spain. We liked them.

We took a day to visit the mountains, and the town of Ronda. Its quite fantastic, very beautiful, and apparently the source and heart of bullfighting in Spain. Hemingway was here, and wrote about the bullfights (Death in the Afternoon); actually being in Ronda almost gave me a twinge of regret that I really don't care about bullfighting.

In Granada we visited the Alhambra, finest example of Moorish architecture in Europe. All the on-line tickets were sold out over a month ago, but we showed up at 7AM hoping to get a ticket, along with several hundred other people. There were tickets, but the machine would not accept our credit card. We did well, considering this was a goal of a lifetime, missed by that much. But wait, the French woman staying at the same BnB says, here, use mine. YEAH! We got in! And we even sold the tickets to the garden we'd bought instead of the ones we really wanted. Tutti va bene!


We had a wonderful time last night with our AirBnB host, a man of almost our age who's wife was traveling. She was the one who spoke English. We had a hilarious evening, drinking his excellent wine and communicating through Google translate. He was wonderful, very caring and heartfelt.


Barcelona, time to drop off the car. It's always so wonderful to arrive somewhere and get a car: the implied freedom, the lure of the open road, the ability to follow your own schedule and your own route. Then, a week or two later, after spending what seemed like hours carefully navigating the last few kilometers through heavy (3 million people) city traffic, it is such a relief to pull into the rental car garage and be done with it! No more parking hassles, no more gas stops. Free at last to wander unencumbered!

We spent the afternoon pounding the pavement, seeing the sights on Barcelona. There are a number of striking buildings by famed architect Nicoli Gaudi. He loves colorful, incongruous, seemingly unrelated elements thrown together whimsically. Our word  gaudy must derive from his name. (Check out his Sagrada Famila cathedral on-line!)


We're now back at the BnB in Ferno, a little town near the Milan airport. The owners are wonderfully warm and caring. In response to our email, letting them know we were coming back in a day or so, Monica and Giovanni replied, "oh don't worry, we'll catch you when you land! " And they did!

Now, with our laundry clean and an Italian SIM card, so we can make phone calls, we're ready to fly out tonight for Lecce and our Southern Italy adventure.