Yes, we left Fez a week (or two?) ago. It was a strange parting: I was anxious to go, yet didn’t want to leave. I know Morocco has a hold on us. No matter how “other” it may seem (and it is the most exotic place we’ve been, on this trip or any), we both feel powerfully drawn to it. We’ll be back, I’m sure.

OK, so on to Italy, through Tuscany and then one month in Lecce. We are taking our time driving through the Italian countryside – and skirting a few big cities – on our trip south. The plane landed in Pisa, but by the time we got baggage and a rental car the sun was dipping below the horizon, so we missed the tower. (All those travel sites that say don’t bother? I believe them!)

Instead, we’d planned a few nights in Lucca, less than an hour away. It’s an old, walled city, but small enough that we didn’t mind arriving in the near-dark. (Well, I always mind arriving in the dark, but it was not difficult, I mean to say!) We had a pleasant apartment, just outside the walls. Lucca is a very pretty city, but I must say I did not appreciate it until we went to Florence.

Ah, Firenze, former capitol of the Medici Empire, home to popes, rulers, and bully boys (sometimes all in the same person). And, the city that probably has more art per square meter than anywhere else on earth. How could we not go?! So the second morning of our Lucca stay found us on the train headed for Florence.


Stunning architecture, fantastic buildings, and great fashions in the shop windows. And people. People, people everywhere. We lasted almost four hours before we were studying our notes to find when the next train left for Lucca. But not before we saw the Duomo with its famous cupola* and adjacent tower, passed through the Piazza della Signoria with its statues, including a copy of Michelangelo’s David out front (and lines of people around the block), and headed for the Ponte Vecchio, the old bridge. Famed for the gold smiths whose workshops have traditionally lined the bridge, on this day it was a mob scene, with tour leaders waving their little flags, and the group members hastening to follow along while concentrating on the voices in their earphones.
*Yes, duomo is Italian for cathedral; “dome” translates to cupola in Italian. Now you know…


We strolled the length of the bridge; l I think we had lunch somewhere there at a nice little pizza shop (we eat a lot more pizza in Italy, and Europe in general, than we do at home – it’s worth eating here!).

We passed the Pitti Palace and wandered through smaller streets before re-crossing the river on our way back to the train station. I’d like to return Florence, but in the wintertime, and perhaps spend a week or so to fully explore the amazing art and architecture. Dropping in for a day is NOT the way to do it! It ended up being more frustrating than fulfilling.

We arrived back in Lucca refreshed by a quick nap on the train. Our walk home took us through the entire length of the old city, and I found the buildings, the churches, the palaces to be on a smaller scale but no less magnificent that those in Florence. And, no lines and cheaper admission prices! As I said, the trip to Florence greatly raised my appreciation for Lucca…

The Hill Towns of Tuscany
Pisa and Lucca are in the northern part of Tuscany; further south are the rolling hills and extensive fields of the famous hill towns. We sent several days in Montepulciano, famous for its Vino Nobile (its signature wine, made principally from Sangivese grapes), and for its fabulous views. The thing is, most of the hills in central Tuscany are topped with ancient stone towns, each with a signature wine, and jaw-dropping views of the surrounding countryside. And at least in the early spring, things are green green green. More than once while visiting these towns we’d fantasize about living in one of those upper-story apartments on the edge of town, overlooking an endless valley covered in green fields.

Volterra was one of our favorite towns, recommended for its Etruscan walls, Roman ruins, alabaster art, and views like this: 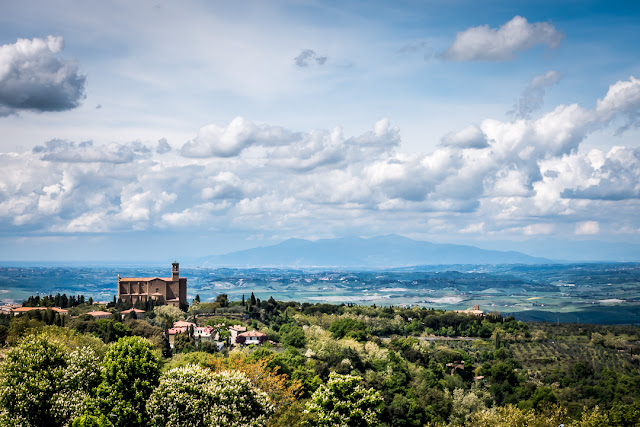 But then, just driving around we'd come across scenes like this winery: 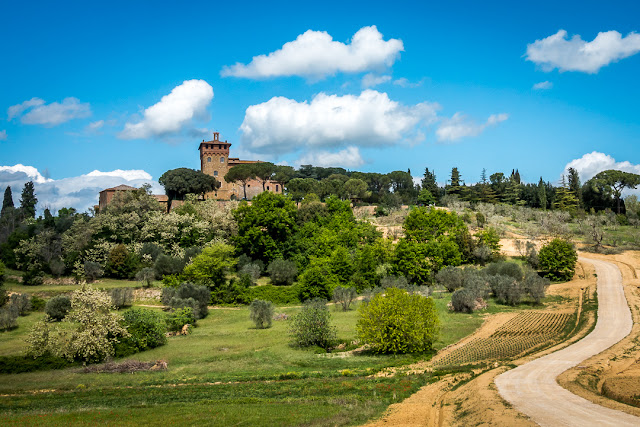 Our favorite Tuscan towns: Volterra, Pienza, and, for something a bit larger, Montepulciano (where we stayed four days).


Of course, the price of a green countryside is plenty of rain, and we awoke on our last day in Tuscany to a light drizzle. We were planning a walk along the lake, but that clearly wasn’t going to happen. Instead, we figured we’d get on the road, and split our eight-hour drive to Lecce (nine, with stops) into two shorter trips.

Driving conditions were good. No sun in the eyes, no glare or intense windscreen reflections; no sharp shadows, just low-contrast, even lighting. The rain let up, and we made it to the mountains that separate the plains of the interior of Italy from the plains of the coast. And that’s when things got weird, just a little.

Our trusty GPS lead us off the four-lane divided highway and onto a well-paved but narrow road up into the mountains. Sharp hair-pin turns climbing steeply, no shoulders, abrupt drop-offs… we continued up, more amused than amazed, enjoying the mountain views and the complete lack of other traffic. Eventually the hills leveled out, there were flat, open fields, and a small farming community. And, a highway on-ramp. The trip down to the coast went much faster than the trip up the mountains!

(Let’s see, that maps on that chip I bought are at least five years old. And things do change. Next European trip we’ll buy new maps!)

Montesilvano and the Coast
After the historic and incredibly picturesque stone towns of Tuscany, the modern coastal cities seemed dull and anti-climactic. But Montesilvano – our goal for the day – was agreeable enough, even if it did not fit the stereotype of an Italian coastal tourist town.

Our BnB was located in a pleasant residential neighborhood a few blocks from the beach, and the owners were very kind. We took a quick walk to the beach: the season was just getting started, the umbrellas we starting to be put out, the cafes getting ready to open. (Going to the beach in Europe is a much more formal affair than in California!) We stared across the clean sand to the waters of the Adriatic, and knew that in the far distance lay Croatia, and the city of Split.

We’d had a good time there, when we visited it some months back, and now BBQ Boy Frank and his wife, Lissette, our second favorite travel blogger (guess who our most favorite is!), had just gotten a long-term residence permit. Good for you, Frank!

We didn’t spend too much time staring out to sea, though, as night was coming on and we needed dinner, and wanted to be up early to get back on the road.

Vieste
Looking at the famous “boot” of Italy there is a “spur” that juts out to the east just above the heel, a bit north of the city of Bari. This area is designated Parco Nazionale del Gargano, the Gargano National Park. We’d long been interested in exploring this area, so our next stop was the city of Vieste, the eastern-most point of the spur.

As we drove along the top edge of the “bump”, the coast was dramatic, with the blue sea a brilliant turquoise close to shore. At least, what little of the coast we could see; in this mountainous area the winding road did not often allow views. But soon enough we were settled into our B-and-B, set in the hills above the town with dramatic views of the harbor and the sea beyond.

Frankly, though, I wasn’t much taken by Vieste. Perhaps it was again due to the contrast between the ancient stone buildings set in the dramatic green hills of Tuscany and the comparatively dull modern apartments in the coastal town. It was a fine town, and right there on the water. But decidedly lacking in charm…

We spent one day driving through the forest that covers this peninsula and that forms the National Park: Foresta Umbra it’s called, the shadowed forest (or some such). I read it’s the last remnants of the ancient forests that once covered all of Europe, so it is certainly significant. We walked a bit; it’s deep, and dark, and very very green. 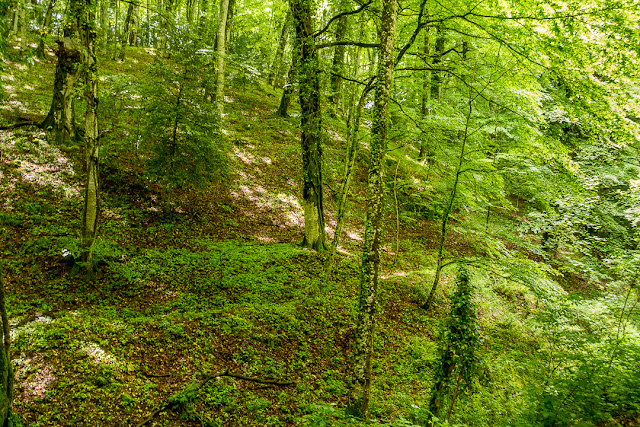 So I give the mountains of Gargano high marks, but the coastal areas, not so much. It seems that all the level areas along the beach are taken up by holiday camps, commercial establishments to provide accommodations and camping spaces (and restaurants, and groceries, etc etc) to summer-time visitors. Most of them were closed this early in the season (we never did find a good grocery store); most of what we saw of these camps was high wire fences and automatic gates. I’ll bet this area is a real madhouse in the heat of the summer!

Lecce
Wow. This post is getting really big! And, we just arrived in Lecce. We’ll have to find out what this place is like. More on that later, no doubt...