We came around the corner and there it was, all white-washed buildings and red-tiled roofs: Kings Landing! But wait, where’s the Great Sept of Baelor? Oh, right…

We left Dublin today in the rain. Up well before dawn for our 7:30 flight, we figured the airport at 5AM would be deserted. Wrong! It was a madhouse. We slowly threaded our way along, stopping at all the stations: boarding pass kiosk, luggage drop-off, security hassle. Then an hour-and-a-half wait at the gate to get on the plane. We sat on the tarmac, waiting our turn to depart, the leaden skies beginning to lighten as the sun rose, and we could see rain falling on the green, green fields around the airport. The rain seemed appropriate, somehow, as our parting scene from Ireland.

The plane took off, and we did not see the ground again until somewhere over Luxembourg. The Alps of Austria and Northern Italy were spectacular, and around mid-day we were flying along the Dalmatian Coast, white, with its black spots... No, wait, that’s the dogs.

We were flying along the Dalmatian Coast, with its sere, grey peaks, steep slopes whose lower regions were clothed in dark green vegetation, and finally, red-roofed villas covering the coast, all set off by the clean, blue Adriatic. We were back in Mediterranean climes! Our landlord had sent a driver to meet us at the airport, a self-admitted chatty fellow who took us the half-hour to our apartment. Along the way the terrain felt very much like Provence, the hilly region in France up behind Nice and Cannes: the same whitish, rocky land, the same scrubby vegetation; the same subtle feel to the sun and air. We could, in fact, drive there from here; up the coast, through Slovenia and west over to Italy, turn right at Venice; then to Genoa and over the mountains into France. Fifteen hundred kilometers, take about three days; but we just got here, and aren’t going anywhere! (Besides, we can’t go back to the EU for another month.)

We’ve been on the road for a good ten weeks, through Brittany and England and Ireland. Experiences have been coming in faster than we can process, let alone record. I’ve got hundreds of photos still to go through, and we’ve got several blogs (at least!) to write. We’ll be here in Dubrovnik for the next five weeks, and catching up will be done, I promise. Although there is a whole new city to explore, stores to find, streets to learn, and food labels to decipher. In France, I was conversationally fluent, and Paula got along pretty well; in England and Ireland, we both got along fine; here, neither of us has the first clue about the language. It’s an adventure!

Up next: still lots to tell about Ireland!
Posted by Paul at 11:09 No comments:

Wet and Wild on the Atlantic Coast

The wind blows. The rain falls (horizontally). The windows rattle from the impact of the drops. The tide goes out, slowly exposing bits of land in the bay (with all this rain you’d think the bay would fill up!). We’re in Connemara, the western-most tip of Ireland (where they say the next parish to the west is Boston). Fully exposed to the storms off the North Atlantic, and populated mainly by hardy and patient sheep, it really is the wild and woolly west!

And we watch it all from a cozy room with large windows. This afternoon it will let up a bit, and we’ll go into town, Clifton, a large-ish town for these parts; we’ll go to the bank, do some shopping. If the air clears a bit we’ll try the “Sky Road,” a road running along the cliffs just south of here with spectacular views (except in the fog!).

After the storm we went walking in the late afternoon, just up the road from the house where we are staying. Spectacular light, as the sun got low and the clouds cleared. Unreal colors! (These pictures are mostly unprocessed, as they came from the camera. Some reviewers say this camera, a Sony RX-100 Mk4, is a bit too saturated; possibly, but these pictures aren’t far from the reality!)


Connemara National Park
Yesterday was calm. We went hiking in the Connemara National Park, not far from where we are staying, and ended up taking the nature walk tour. Learned about the three types of heather, including one unique to this region. Walked through the bog, on a board walk; began to learn about peat and how it forms. Experienced the wild beauty of Western Ireland; contemplated what it might have been like for those early Irish monks, in the 6th and 8th Centuries, who came over these hills (or hills much like these), green and rocky, or wet and boggy. Treeless rolling hills that do little to stop the gusty winds.


My “peat education” continued when we got home, with a long discussion with Gerry, our host. Many people in the area – indeed, all over Ireland – burn peat. It’s common to see it drying in piles along the roads; in recent times past, families would go for a day’s outing to picnic, drink beer, and cut peat, although now it’s mostly done by machines. (the peat cutting, not the beer drinking).

In this room where we’re sitting, watching the storm, is a stove and a basket of dried peat. It’s in clumps, each slightly smaller than a loaf of bread, and very light. The energy content isn’t high, and it burns at a relatively low temperature, producing plenty of white smoke. We see a few houses around with smoke pouring out of the chimney. The smoke is relatively cool and heavy, barely escaping from the chimney to slide down the roof while being dissipated by whatever breeze there may be. The smoke has a distinctive, earthy odor, appealing to many (but not all!).

Alcock & Brown, and Marconi’s Wireless
Since Connemara is the western-most point of the western-most country in Europe, it is the closest point to North America. This in turn has given it a couple of distinctions in the history of modern technology.

In 1907, Guglielmo Marconi established the first regular transatlantic radio service between Ireland and Newfoundland (called “wireless” at the time, a name which is once more in vogue). The European transmitting station took advantage of Connemara’s geographic location. The wet, boggy ground, electrically conductive, helped improve the radio signals, and rock outcroppings provided secure anchors for the tall antennas.

A decade or so later John Alcock and Arthur Brown, two British aviators, were the first to cross the Atlantic by air, leaving from Newfoundland in June of 1919 and crash landing not far from the Marconi site in Connemara 16 hours later. (They had intended to land, but didn’t realize that open grassy field was in reality a bog!)
Today there is a new memorial commemorating both of these on a barren, wind-swept bog in Connemara. There’s not much there yet but a car park and some informational panels. We would have explored longer, and brought back more photos (of sheep and rocky bog land), but the increasing rain drove us home. Still, both of these accomplishments are memorialized with the names of Marconi, and Alcock & Brown, on numerous enterprises, restaurants and hotels.

It didn’t start out as an abbey, it was built as a private home for a rich industrialist from London, Mitchell Henry. THAT part of the story really put me off, given the injustices and pain inflicted by England upon the Irish for hundreds of years. Yes, the construction, in the late 1800s, provided much-needed jobs for the locals, and the gardens, grounds, and upkeep of the house gave on-going employment. But this does look like another case of a rich English lord arriving to assert himself over the Irish peasants. Still, he was very good to his tenants, helping them out when times got tough, and installing glass windows in everyone’s houses. (A stiff tax on window glass at the time meant most homes had no windows, so were dark and stuffy. This tax led to the expression “daylight robbery.”) He was, according to the website, “an enlightened landlord and vocal advocate of the Irish people.”

AND, he did build it for love, as a wedding present for his new wife. Then I learned his parents were Irish, and had emigrated to Manchester, England, where his father made a fortune in textiles. So maybe he wasn’t such a bad guy after all, but a good guy caught up in a bad system (maybe kinda like Father Junipero Serra?).

The house itself is fantastic, on a site of great natural beauty. Only a few rooms can be visited, as it is now an active abbey for Benedictine Nuns (long story, that). So that part of the visit went quickly, and we moved on to the chapel, built by Henry as a memorial to his wife, who died suddenly from an illness. Small, but incredibly detailed, with marble columns from the four major provinces of Ireland: green from Connacht (Galway), rose from Munster (Cork); black from Leinster (Kilkenny); and gray from Ulster (Belfast), all set off by Italian sandstone. Next, a long visit to the walled Victorian garden.

The Sky Road
We did eventually take the "Sky Road," a loop around the headlands with magnificent views west over the Atlantic. This is part of the "Wild Atlantic Way," no doubt a concept from the Irish tourist board, a series of roads that skirt the ocean all along the western coast of Ireland. (Perhaps it's just me, but it seems that the word "salmon" should be in there somewhere!)

Along the way we realized we could discern the locals from the tourists: the locals, mostly coming the other way on this shoulderless 12-foot wide road, would flash by hardly slowing down; the tourists would stop far down the road, and we'd pass them slowly and notice their big round eyes and hands clenched on the steering wheel...


Our initial plan was to stay in the region for only a couple of days. We had juggled our schedule around a few times while still in England, adding a quick trip to Northern Ireland and Belfast, but finally dropped all that and came directly to Connemara from the ferry dock in Dublin. While I do regret missing the northern coast, and Ireland’s other major city, we’re both very pleased with having extra time in this fabulous raw and unspoiled area.


Here's a few more photos taken on our walks along the road where we stayed in Connemara. 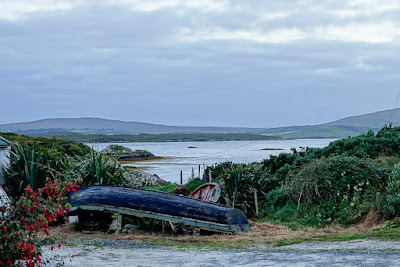 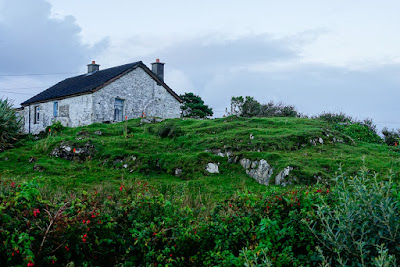 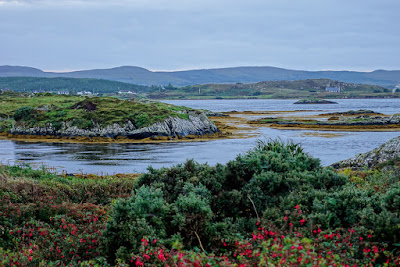 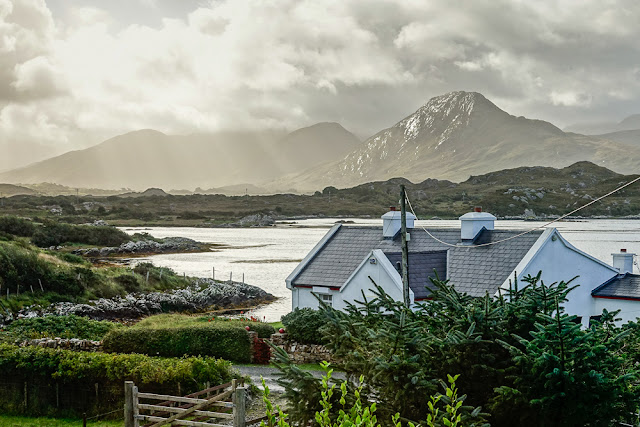 Next up: Our wind-swept trailer near Dingle
Posted by Paul at 12:58 No comments: