And we took the bus! We’ve been wanting to get out to Saint-Guilhem-le-Désert, a small town north of here. Car rentals are expensive; and there’s that refinery strike thing. But we found there are several buses a day going (and coming!). And they are incredibly inexpensive: 1€ each way.

We’d heard about this 1€ bus. It’s part of the Hèrault Transport Network, and the 1€ fare is only good within Hèrault.


There are five more départements overseas, the départements d’outre-mer or DOM. These five are the last remnants of France's once-extensive colonial empire.

First step was riding the now-familiar electric tram to the end of the line. (Ok, there’s another 1€ each!.) Then after a brief wait our bus arrived. It was pretty delux, since it was a long-distance bus. But we were only going a rather short distance, the first leg of our journey.

We were able to buy our tickets on the bus; actually, to get the 1€ rate we bought a card good for ten rides. We were pleased to find we only needed one card; we punched it twice for the two of use.
We soon arrived in Gignac, where we changed buses for St. Guilhem. We had about an hour to wait, so we wandered around this village, found a nice café, had sandwiches and beer. As we ate we realized the weather was not so nice; it felt like rain. What happens, we thought, if we get to this very small town, where the bus does not return for a couple of hours, and it rains? Hiking becomes very unattractive!

So we abandoned plan A, gave up on plan B, and switched to Paula’s plan X. (That’s the one you didn’t know about until you got there.) Rather than go someplace and get stuck in the rain in the afternoon, let’s just get back on the bus and see where it goes. We have the map, and our tickets are good for two hours. We can go to St. Guilhem another time; there’s more busses going there on the weekend anyway. So back out to the road (a two-minute walk), wait a few minutes, and climb aboard the bus. (Same direction, less than two hours, same ticket!)

This bus, intended for more local travel, is a bit more funky, but just fine for this short trip. We’re cruising through the French countryside, past vineyards and ancient stone houses, with a great view from our elevated seats ( buses give you a much nicer views than cars; the windows are bigger, you’re sitting higher, and you don’t have to watch the road!). We check the road signs as we go through the round-abouts (les rond-points) and follow along on the map. It doesn’t matter, though, because the driver knows where he’s going, duh!


After a bit we stop in the medieval (almost no point in specifying that, here in France) town of Pézenas. A quick look at the bus schedule sign shows that we have we have two hours to explore the town before our tour bus leaves (and so far the “tour” has cost us €1 each; for the next leg, back to Montpellier, we’ll have to buy another €1 ticket).


On our way to the Pézenas tourist office (always our first stop) I see many references to Molière – the namesake of several hotels and cafés. I think of this fellow Molière as the French Shakespeare, highly regarded and honored everywhere. (Here in Montpellier, the house of his friend where he stayed briefly merits a plaque on the outside – and a Molière café nearby). He lived and worked in the mid-17th century, about a half-century after Shakespeare.

The nice lady at the tourist office told us that Jean-Baptiste Poquelin was born in Paris, but Molière was born in Pézenas. Which is to say, the man first saw the light of day in Paris but got on stage, and took his nom de plume, in this small town.


It did start raining, we were secretly pleased to see (because it meant we’d made the right travel choice) while we were studying the medieval architectural exhibit upstairs in the tourist office. (Which is where I learned that the kind of spiral staircase we have in our apartment building is called an escalier de vis, a screw stair. I’d been wondering…)
We wandered under the gentle rain through the town to the free door museum. We skipped the toy museum, and spent the remaining quarter hour in the town enjoying a coffee at a café near the gare routier (bus station). 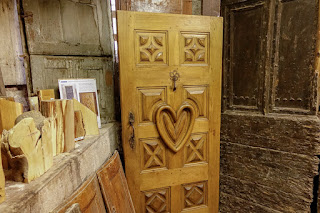 The bus arrived, we got onboard. We traveled down narrow roads through lieu-dit (a named place; a farmhouse or two with no services of any kind) and open farmland. At one point we swung down a tiny lane to a small fortress-like church and its associated village (a few houses, a small square with a café and a boulangerie). It was a tight turn, into the bus stop. The bus rushed in toward the wall, the driver spun the wheel with élan, and the bus came to a nice stop right between the lines, missing the wall by quite a few centimeters. We found it an impressive feat, and realized the lady driving the bus was a real expert.


Before long we arrived at the coast. We didn’t see the ocean, but drove along a long étang, This is a shallow body of water, in this case separated from the Mediterranean by a long sand spit. (There are many étangs in this region, some long and narrow along the Sea, others inland.) We followed it for several kilometers before turning northward into the agglomération  (greater metropolitan area) of Montpellier. Which is to say, good-by vineyards and ancient villages, hello modern apartments and traffic.


The bus left us at the end of the tram line. We complemented the driver on her expertise as we descended, and headed for the waiting tram.


Once back home we consulted the map, and shook our heads. Over 100 Km (65 miles) on the bus for a cost of 2€; throw in another 2 for the tram (one each way) and our transportation costs for the day totaled 8€. Hell, we couldn’t have bought gas for that much! (Assuming we could have found it.) And we saw parts of the countryside we never would have attempted in a car, and  in a very relaxed way.


We were very pleased with our day’s adventure!

And right now, Paula is getting us reservations on the 1€ train to Perpignan, 160 kilometers away!