Which, exactly, was our goal for coming to this part of England, the Lakes District (known for its mountains!). We have been busy, getting oriented to the area, finding our way around. We spent a “Stones” day, visiting a couple of stone circles (Castlerigg, Long Meg and her Daughters) on our way to Hadrian’s Wall.

We have since re-visited Castlerigg, not far from where we are staying, in the late afternoon when it was not jammed with people. Long Meg is quieter, being more remote, but the hills surrounding Castlerigg make it exceptionally beautiful. A plaque at the entrance describes the circle, and notes that these sites were much visited in the late 18th and 19th Centuries. Wordsworth and Coleridge visited Castlerigg in 1799, but were put off by the crowds, and found no inspiration there!

The Wall has fascinated us for some time. Built by the Emperor Hadrian around 120 AD, it was an attempt to stop incursions of barbarians (now known as Scots) into Roman Britain to the south. Originally 18 feet high and 15 thick, it had a guard tower every Roman mile (a thousand paces, about 1.5 k or just short of today’s Statue mile), with a smaller tower in between. An impressive piece of work, certainly! (And the inspiration for The Wall in George R. R. Martin’s Song of Fire and Ice.)

Today much is left to the imagination. Stones from the Wall have been used for other construction projects for 15 centuries or more; many farmer’s cottages contain stones from the Wall. At one site a docent told us a military road, built in the 18th Century, consumed many stones from the Wall. The sections of the Wall we saw (and photos of other sections) were only waist or shoulder high.
Still, it rambles over the hilly countryside, overgrown in places, from sea to sea, for 73 miles (and that would be modern Statue miles; about 80 Roman miles). We learned that the best way to experience the wall is to walk along it, as there are only a few spots accessible by car (and they tend to be mobbed!). It was the end of the day and we were not prepared, physically or mentally, for much hiking. So we strolled along a section of the Wall and called that good.


England, though, really is a nation of walkers. Along nearly every country lane can be seen signposts marking a “Public Footpath,” with pedestrian gates (small “kissing gates” that allow only one person at a time through) to keep in livestock. Farmers seem quite open to walkers crossing their land, keeping to the designated path. Much of the Wall has a public footpath alongside it, and from what we saw people are keen to walk them. 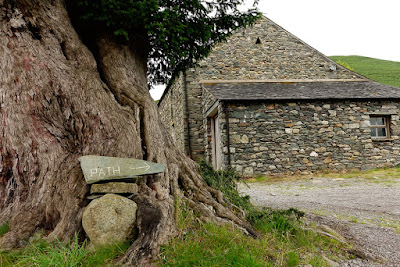 There are many of these footpaths around the village of Braithwaite, were we are staying. The nearest  town, Keswick, is always swarming with people, most of them in hiking gear with backpacks and serious hiking boots. The town has any number of pubs, inns, and cutesy tourist shops. It’s less than three miles from Braithwaite (one mile, if you walk!).


We like Braithwaite, and are sad to leave. It’s quiet (except at 7 AM when, from my bed, I hear the hikers, as they prepare for their treks up the “fells”), not much is going on, and it is accessible to many of the fine walks into the heather-covered hills.

We’ve had to learn a few terms here, though. A fell is a mountain, from an old Norse word. Barrow is a rounded fell, and there are a few around here. And vale, of course, is a valley. Our most recent efforts took us to the top of the fell called Barrow (yes, it is rounded at the top, and very steep on the sides!).
On the first attempt we got out our front door and past a farm (following the public footpath signs), then up a steep hill that got steeper. And steeper. That was a good effort for the day and we returned home.

Today, though, we got serious! Up past the pub, through the gate and off the paved road. We came around the barrow, up and up hiking through the heather, purple in its late summer radiance, along a well-worn trail.  We got to the spot known as the Barrow Door, a saddle between two hills. First, take the right path, steeply up to the top. Fantastic view! Green fields dotted with sheep, the lakes, not so distant from here. Bit of a rest, then down again, and up the back side of the Barrow.

Success! We made it to the top! Lunch time, take a rest. Talk to the passing hikers. We had a long conversation with two couples on holiday from another part of England. Brief discussion about Mr. Trump, our Republican candidate for President. (His candidacy causes considerable anxiety here in Europe.) Got some tips for visiting the city of York, our next destination. A pub called the House of the Trembling Madness? We have to go there! 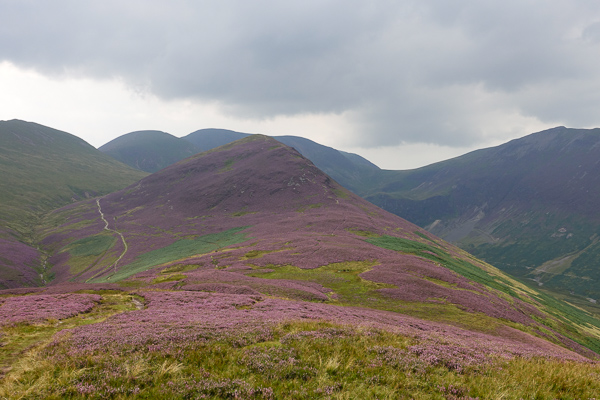 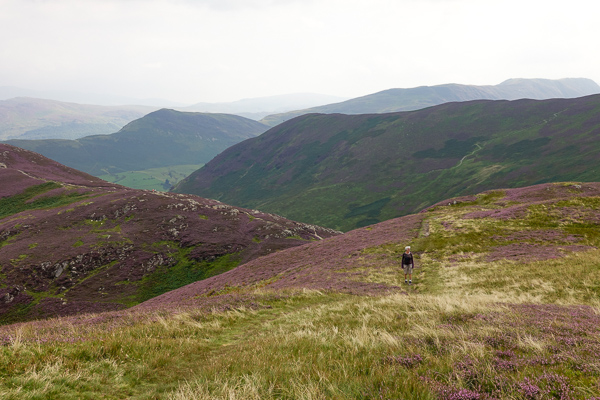 Finally lunch is over, and we are on the trail again. All downhill from here, though! We come down that trail that was too steep before with a sense of satisfaction. Once more past the farm, through the gate. Not straight home, though. A deviation towards the pub, were we celebrate our success in the traditional way, with a pint of the local bitter.