Well, we've been in Seville, Spain for over a week now. In our excitement to get acquainted with our new city, we have overlooked the blog. This entry was obviously written a while ago (mostly), but it is time to close this chapter, and make room for what's up next.
Here in Dubrovnik the days are getting shorter, the weather colder. Winter's coming. Time to travel on.Yet we are very reluctant to let go of Dubrovnik. It’s really got a hold on us! Friendly, helpful people with a good sense of humor and a nearly incomprehensible language. Ancient walled cities with endless stairs going up and up. That fantastic blue sea lapping against the pine-fringed rocks. Olive oil! Garlic.  Some fine beers (yah, Karlovačko!), and great wine that we are only just beginning to discover.

While our thoughts are drawn ever more frequently to what we will find in Spain, we still have a list of things to do here:

·       Get in the water. Yes, amazingly, we have yet to even dip a toe in the blue Adriatic (with a reported temperature of 72 degrees! Eat your hearts out, Californians…)
·       Climb the hill overlooking the city. There’s a cable car to the top, but I’m intrigued by the path that zig zags up the face of the hill. Must be good views from up there, too! (Maybe we’ll take the cable car back down.)
·       Visit the walls – after weeks of indecision, we want to walk along the top of the walls, about 2km all the way around. After all, that’s the main attraction here in Dubrovnik, worth the $18USD entry fee!

Done! We climbed the walls. And had a very interesting Moment…  In a sheltered alcove along the walls we came across an older man painting. He was surrounded by watercolors and acrylics for sale that he had painted. We sat and rested on the adjacent bench, and Paula began talking to him. We found that like most Croatians he liked to talk, and was quite friendly towards us. He was born in Dubrovnik, and had seen major changes in the last decade. As the tourist industry increased, people began moving out of the old town, building houses in the surrounding area (and indeed, many of the houses in the area appear to be relatively new). Some sold their homes inside the walls and bought two houses outside the walls. Places inside the old town were converted to guest houses, or divided into apartments for vacationers.
He then told us he now lives in the Lapad area, and meets every morning with his buddies at a café. He carefully described the location, and invited us to join them, saying they were easy to find, as they made a lot of noise. So, the next morning we showed up at the café around 9:30. He was stunned! We weren’t invited into his inner circle or anything, but it was fun to show up. And, the cappuccinos were fabulous! (We did get lots of tangerines, too; seems that one fellow had a tree full of them and was giving them to everybody he met.)


I think that’s it, for things not done. We had some others, but find ourselves lacking in ambition, after spending August and September moving on every few days.  The coast here, and the coastal islands, is full of places to explore, with no end of ancient, walled cities.

We’ve visited a few of these walled cites. Dubrovnik, the most extensive and best preserved, well deserves its reputation as the “Pearl of the Adriatic.” But Split has walls too, and so does Hvar (a city on the island of Hvar we visited on the way back from our trip to Split). Yesterday we took a bus tour to Kotor, a bit to the south in the neighboring country of Montenegro, located on the only true fjord on the Adriatic (and probably the entire Mediterranean). And Kotor has some very impressive walls, climbing impossibly steep mountain slopes.


After a time, though, I must admit that the charm of old stone buildings with high city walls begins to wear thin. When everybody’s got ‘em, they just become, well, ordinary!

While the walls were essential when they were built, today things are different. Stone walls are useless in keeping out invaders, and the whole idea of “invasion” has changed. Now, sometimes an invasion is welcomed; such as the invasion of tourists to the Old Town of Dubrovnik every time a tour ship arrives…

Things do change. Dubrovnik, in spite of (in addition to!) its ancient history, embraces the modern. An example: we went to a TED talk, in Dubrovnik. The theme was “Living Tomorrow.” Which implies moving beyond today.

A day of TED talks! How exciting! And it was held in the old, highly-decorated theater! We’ve got a box on the third level! So thrilling! Oh, wait, oh, wait, all the talks are in Croatian. Well one was in English. Sigh. Let’s leave…

Actually, the one in English, presented by an American woman who teaches English at the American university, fascinated me. It was about the changes English is undergoing as it becomes a universal language; people all over the world use English, or a form of it. English is constantly changing and adapting, and in different ways in different areas. This is particularly interesting to us as we travel through non-English-speaking countries. There are now many forms of English; the version of MS Word I’m using to write this lists 18 varieties of English that may be used in the spell checker. If you have a later version, it will have more.
Paula contacted the young woman who had sold us the tickets. She was quite concerned that we could not understand most of the speakers, and in compensation offered us a personal tour of the Old City. She was born and grew up inside the walls, and gave us some insights into the origins, history, and life in Dubrovnik. It was a very special evening!

Yes, we will miss Croatia; the history, the hills, the fine people, the great views. But we will come back. Oh, yes, we will! 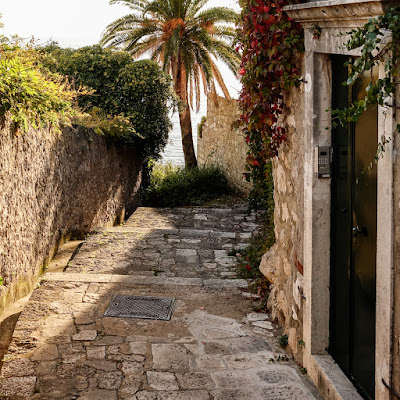 But this is the image we will always remember, the ocean view from our terrace! 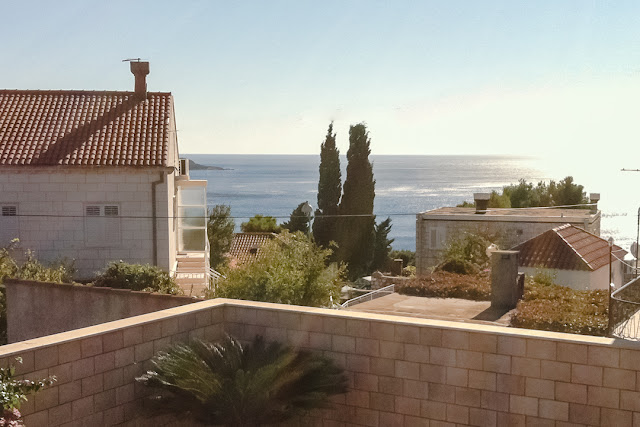