We Went Walking
One question that must arise when people think about our travels is, what do you do all day? If we were here for the two or three days that Rick Steves (one of our favorite travel writers) suggests, we’d exhaust ourselves running around to see everything. But we have the luxury of time; what we don’t see today we can see tomorrow, or next week, or even next month.

So what, then, do we do all day? Sometimes it seems we spend a good part of the day staring at computer screens: planning future trips, or the next stop (we need to think three to six months out to get good, affordable places to stay); examining, sorting, enhancing, and deleting photos; writing blogs; keeping up with our friends and the news. Of course, the first week after arriving in a new place is spent organizing and storing our things (as is the last). But we’re well past that point now!

Every day, though, we do make it a point to get out and explore. Our apartment is in the old Jewish section of Seville, the area called Barrio Santa Cruz – lots  of saints’ names here, just like in California! (Oh, Barrio? Means neighborhood.) The streets are narrow, the buildings three or four stories. Some streets are mere pathways, dark and cool. Others are wide enough for a car… just. Tourists and us newcomers step up on the very narrow sidewalks and scrunch against the wall as the cars pass; locals ignore the cars, forcing them to slowly follow the pedestrians. (And I must say, drivers here in Seville, even on the larger four- and six-lane roads, are very attentive to pedestrians, stopping carefully even for the rare idiot who insists on crossing against a red light.)

We pass cafés at every corner, and often in between. In the evenings customers spill out into the street, drinking, talking, laughing, smoking. The tables filling the sidewalk are likewise jammed. At other times things are quiet; there will be only a few customers with a waiter cleaning up, or standing by awaiting the flood that will come later. Last Friday night we were out for an hour or so, making a big loop through the area. There were thousands in the streets and cafes, sitting on the church steps (bottles all around!), just enjoying a pleasant December evening.


Things are typically quieter during the day; people are working, at least those fortunate enough to have jobs. But the shops are open: the clothing stores, the bridal gown places, the shoe stores, the opticians; the beauty salons. This is the time to get stuff done! And, there are always people in the cafes, for a quick coffee (well, “quick” is relative, this is Spain), or perhaps waiting for friends or a business associate. But life is never dull here. 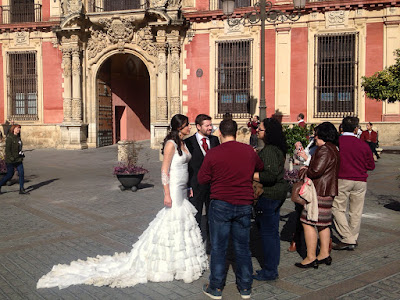 This morning we went out for an hour or so to enjoy the sunshine. We got back home about four hours later, having discovered a whole new area of large parks and incredible buildings.


Our goal for the day was the Plaza d’Espagña, an incredible structure intended to demonstrate the magnificence and diversity of Spain for the Ibero-American Exposition World's Fair in 1929. (You may have seen it in Star Wars II: Attack of the Clones – perhaps the only good thing in that movie). 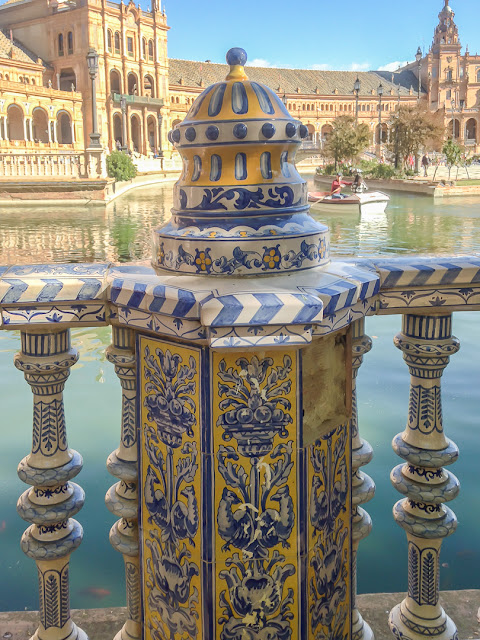 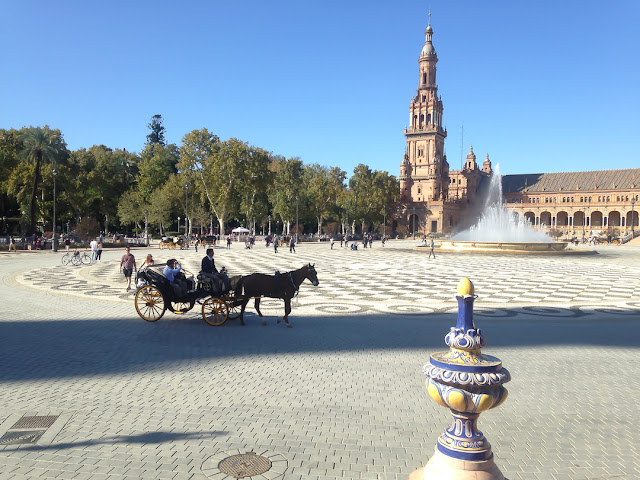 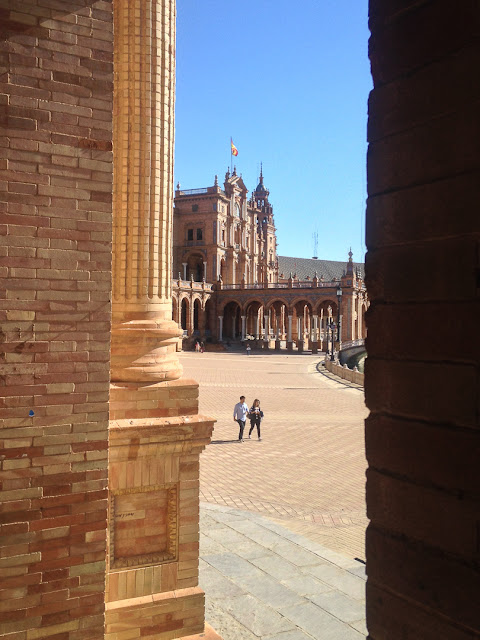 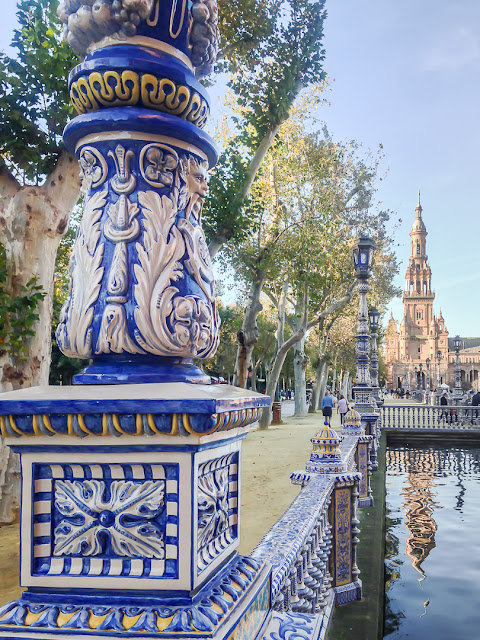 Anyway, the building is quite amazing, very stylized, constructed of brick and covered with classic Spanish tile. Today as we re-visited it we found there are a number of other buildings also constructed for the Fair, in a similar classic style.

We finally made our way home through the long park with the monument to Christopher Columbus (he sailed from Seville in 1492, and his remains, what little there is, are in the Cathedral here). We leave the major, busy streets and slip into the tiny lanes of Barrio Santa Cruz and find our way back to our apartment.

We Went Sherry Tasting
Now, I've never really thought about sherry much. Heard about it, know how to spell it. But being here in Seville I have slowly become aware that we are in sherry country! Here it is a Big Deal. So maybe we should learn something of it.

Sherry comes from the town of Jerez de la Frontera, about an hour and a half south of here (Sevilla). The name Sherry derives, somehow, from Jerez, and is now a protected domain name, like many other wines. The grapes must come from a specified area, processed in a particular way, and the resulting wine is aged in new oak barrels for a time corresponding to the class of sherry. (What happens to the used barrels? Whisky distillers want them!)

Some Sherries are dry, and some sweet; Bristol Cream is a very sweet sherry that has been a favorite in Britan for generations.

There are Sherry tours, where a knowledgeable person takes you to a bar to sample various types of Sherry; and if you go to Jerez there are endless tastings at the wineries. (Just like the many wineries in Paso Robles!)

But we wanted something a little lower key. After all, our neighborhood is full of tapas bars, all of them offering many kinds of wines and spirits. So Paula went on-line and found one bar renowned for their sherry collection. And, it was only a few blocks away!

We headed out into the on-going Disneyland that is Seville at night, and showed up at the bar around 8PM. That’s pretty early for the Spanish, and things were slow. We explained what we were after to the waiter, a young guy who spoke excellent English, and he said,  sure, have a seat! He brought us a couple of glasses and a splash of dry sherry (as with all wines, one always starts with the driest and moves towards the sweetest, otherwise the taste buds get clogged up). He kept bringing fresh glasses with each new bottle, suggesting foods that would go well. We were full from dinner, so declined the food, at least this time around. (At the waiter’s mention of Manchego cheese, though, I suddenly realized that Sherry with food would be a very different experience!)

We got to the sweet wines, and agreed to a cheesecake; very good, and very appropriate with the last two sweet Sherries.

The waiter was quite nice, professional yet very friendly, listened to what we wanted and made suggestions. When we were finally done, we got the bill. A whopping $20USD!

Sherry seems to be an acquired taste. I must admit that I am not currently a fan. The dry Sherries are a bit too light, and there is a flavor I do not favor. However, we are looking forward to returning to try again, this time pairing the Sherries with appropriate foods. I expect that will be a worthwhile experience!