So now, what about those transport cards? Is all lost? Let’s take a look…

Back to the tram station yet again, just to ask.  Hope of ever getting our tram cards in time was fading, but we needed to put in the effort. This time, though, our cards were there! Yah!

And that set what we’d do for the afternoon: ride the tram!


​We’ve been up and down the coast several times now; we’ve been all the way to Benidorm. This is a heavily built-up city. While the whole coast is full of high-rises, Benidorm is a real forest of some very tall structures. Paula read the other day that its 153 skyscrapers are second in number only to New York City. Not really our kind of place! We didn’t stay long, since on this occasion the journey was the destination. Someday we will mount an expedition and explore the city further, and take the next tram line that runs even further north up the coast. 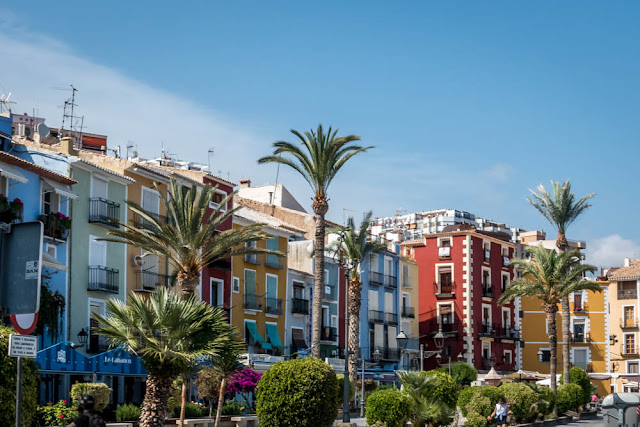 Meanwhile, we’ve become regulars at the Tuesday afternoon boules* game organized by and for the Brits** in El Campello, another beach community.

* The French game played with heavy steel balls about the size of tennis balls; we’ve played in France, and have spent many hours watching others play.
https://travelingpps.blogspot.com/2015/11/bienvenue-to-hood.html

** Well, most of them are Scots, actually. Does that matter?

We’ve learned that there is a large community of people from the British Isles here. One of the many regrets we have leaving – and there are always many regrets, when leaving – is that we won’t have more time to spend with these potential new friends!

We’ll just have to come back and stay longer…

I’d like to give a special tip o’ the hat to our boule partner Mike, a Glaswegian (that is, someone from Glasgow). Since we will be traveling in Scotland in a few months, we’ve been bugging him to teach us some Scots slang. He’s been trying, but I feel the fault is with us; you have to be born there! The rest of us just can’t twist up those vowels and consonants in quite the same way.

And then there is the wine museum. Not far from the boule-playing beach in El Campello is a truly amazing collection of Spanish wine. First Saturday of the month the proprietor puts on a wine tasting. We went, of course. I can’t say I was impressed by many of the wines, but it was surely worthwhile to wander through room after room of floor to ceiling bottles! And we met some of our boule-playing friends there, so the conversation was great, too.


Another addition to the list of things to do when we’re back in Alicante. And I do expect we’ll be back. However, Wednesday will be our last day in Alicante this time around. Early Thursday morning we will be boarding a flight to Bergen, Norway, famed for its rain (and its cod, I must note). In the three months Paula has been tracking the weather there, it’s been sunny, oh, several times. This week the weather is actually very nice (i.e., warm and dry). We’ll let you know what we find in our next report.


My my, back in Alicante I see we have some unexplored photos...

The Beach
I have finally discovered the beach here in Alicante. What? Isn’t that why people come to Alicante, for the beach? How come it took four weeks for me to “discover” it? Probably because I come from California. Hey, I grew up on a beach! (Not quite true.) My earliest memory is being tumbled in a wave on a Southern California beach (Very much true!) So, don’t tell me about beaches.

Yeah, I’m a beach snob. Too bad! I missed out on four weeks of beach going! It’s only been a week I’ve been swimming in the ocean, and I like it. It makes my body feel good. My skin has a glow after being in the salt water and lying in the sun. Today I made it out and around the swimming buoy with no trouble (a week ago that seemed a formidable task.) And now we’re leaving. Oh well.

We’ll be back in November. (Will it be beach weather, here in Alicante?) ‘Till then, we’ll say “see you later” with these photos, taken in the evening from the seventh floor of a beach-front high-rise. 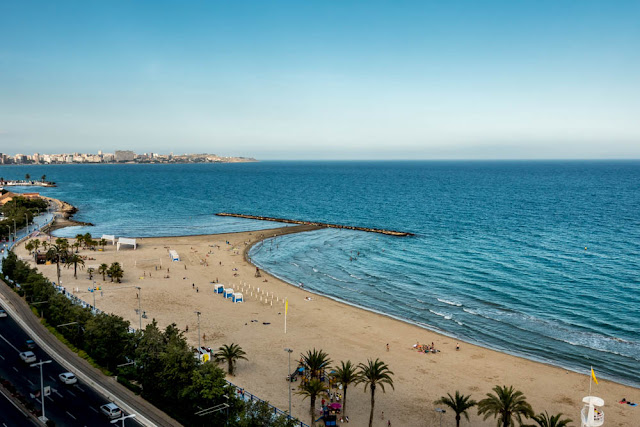 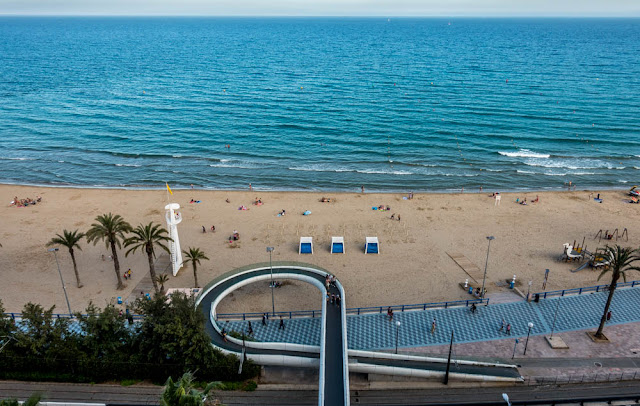 Our last day; tomorrow we will be up and out before 04:00 AM to catch our 06:00 flight. We have the usual feelings: regret at leaving, anticipation of arriving moderated by concern with what we'll find, with excitement and anxiety looking very much alike. And then there's that 4AM thing!

In any event, the next blog will come from another country, another latitude. Hasta pronto!.