Little Venice, Again
We were charmed by this area the first time we found it, and vowed to come back. We did, to take the canal boat trip to Camden Locks, a few miles up the canal. Our ride was narrated by a woman who clearly had a great love of the canals and the life that they enabled. We learned that the canals were built in the early 19th century (and some earlier!) to provide transportation for goods, and the boats – like the one we were riding in, some 76 feet long – were towed by horses. One horse, anyway (one horsepower!), that followed a tow path along one side of the canal. At bridges and tunnels we were shown grooves worn in stone and iron from the tow ropes.

The canals were slowly replaced by railroads, and by trucks and roads. Many were filled in; now there is a serious effort to renovate and rebuild the canals for recreational use. As we drifted slowly along (we traveled the 2.3 miles in 45 minutes) our guide pointed out that we were in full nature, with trees and plants, birds and wildlife, in the heart of London! Our route took us past the gardens of some very exclusive houses in St. John’s Wood and past the edge of Regent’s Park and the London Zoo.

We eventually arrived at Camden Locks in Camden Town, a rare dual lock. (Locks are necessary because the route of the canal changes elevation on its way to the Thames.) The double locks attest to the high traffic in this area, back in the day. And, back in the day, Camden Town was a major transshipment point, where goods were moved from boat (never call them barges!!) to road and rail, with horses playing a major role (if hauling heavy wagons can be considered play!).

Horses were so important that stables were built, eventually housing over 200 animals, and a horse hospital. Today they are all gone, of course, and the brick buildings have been repurposed as… wait for it… a shopping center! Well, a market, quite famous today, with many individual stalls selling all manner of artistic and, occasionally, useful items. (Paula bought a hat!)

We headed a block or so into town and had a fine lunch at the Elephant Head, a traditional English pub. While these places may seem to be a bit of a cliché – or a holdover – to modern Brits, we like them, and seek them out for a nice meal or a refreshing pint.

Done with the market and lunch, we walked towards home, climbing Primrose Hill. We admired the view of the city skyline, constantly changing with new and continually more extraordinary buildings, and punctuated by countless construction cranes. Then we found a quiet spot on the grass and admired the clouds passing. Eventually, we walked down the hill and caught a bus for home.

To see more of our canal trip, click here to see the video.

Video: A Canal Ride Through London

Return to Battersea
In a previous blog I talked of our “discovery” of the Battersea Power Plant. We wanted to go back and visit this park on the far side of the river, initially opened in 1858 (since the power station was built in the 1930s we can establish that the power station took its name from the park…). We rode the bus, getting off at the south end of the bridge, and walked through the new residential / commercial development that takes its name from the massive brick power station. It’s quite an impressive development! High-end apartments with fantastic views, private gym and restaurants, public markets and stores, gathering and performance spaces, and interesting art intended to engage the public with the project. 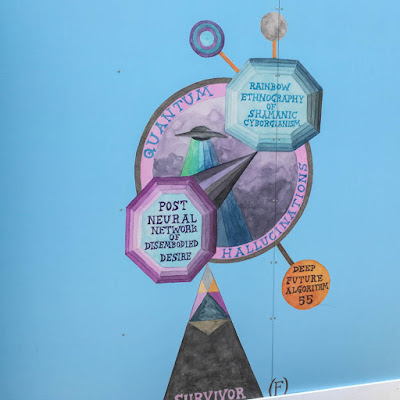 We followed the road around the power plant, hoping to pass back in front of it along the river to get to the park. Ah, but the river walk is closed until construction is complete (there will ultimately be a park between the river and the re-built plant), and we didn’t want to retrace our steps to get to Battersea Park (the 1858 one). Instead, we followed the river downstream to the Vauxhall Bridge and crossed over, heading up towards Westminster.


We had no clear plan, but we’ve learned that it’s necessary to walk only a short ways in London to discover something interesting. Before long we came upon the White Swan, a pub we’d seen from the bus a time or two, and went in to see what it was like. We were met by a friendly young bartender who immediately began describing the refurbishment the bar had just undergone. Two hundred sixty years old, the place was, and dark and dingy. They’d raised the ceiling, uncovering massive beams, and scraped off the thick sticky black paint from the outside, revealing an impressive marble doorway.


After this enthusiastic conversation we ordered a couple of pints and settled in for a while, and soon met a couple of locals. Of course, some like the new look of the pub, and some feel it’s been ruined. But the conversations were engaging. (One thing about being from California: it gives people the impression we’re interesting – everybody wants to hear about it!) And before we left, we found the rain squall that had been forming, and worried us as we crossed the bridge earlier, had passed through, and we had dry weather all the way home.

UP NEXT:
By the time you read this we will have left the UK, on our way to Prague, Vienna, and Turkey. We are already nostalgic for our garret flat in Notting Hill; for our adopted neighborhood; and for all the possibilities of London!
Posted by Paul at 03:48