(Paul, standing at the kitchen sink) Well, this sponge is about shot. Time to get another one… No, wait! We’re leaving in a week!
Yeah, only a week left and we’ll be moving on from Essaouria to our next stop, Fez. Our time here has been worthwhile; we’ve enjoyed the warm temperatures and the bright sun, strolling through the ancient medina and watching the noisy seagulls. We’ve reconnected with people we met before, and have made some new friends. Overall, though, it is time to be moving on. I really feel we’ve squeezed all the juice we can from this orange (to name just one of the many available fruits here).

I’ve been feeling a sort of timelessness here. A personal timelessness, brought on mostly by our lack of any schedule: we have nothing to do and no place to go. Essaouria is slow paced; visitors come here to slow down and idle on the beach, ride camels or quads or wave-driven boards. No doubt there are many locals working very hard, but what we see are slow-moving gardeners and shop keepers sitting in the medina awaiting the tourists. Quite different from Seville, where just outside our door were crowded streets with people coming and going, and crowded cafes with people sitting and talking, eating and drinking. There was always something going on; even the buildings themselves seemed to be in a constant flow.

But Essaouria—indeed, Morocco itself—is the embodiment of timelessness. Like most underdeveloped countries, modernity has been slow in coming, and traditional ways are retained. And, Essaouria is an ancient city. The Phoenicians were here, the Romans. Fortifications built by the Portuguese in the 17th century are prominent in the harbor; the medina was finished in the 18th century, and while parts of it are crumbling, it really is pretty much the same today as it was then. Local men and women wear the traditional djellaba; fruits and vegetables and small round loaves of bread are sold off carts wheeled into the streets every morning.

But as the time for departure draws near, we, as always, begin to feel a sort of pre-nostalgia for where we are. We start noticing things more, regretting what we haven’t done and appreciating even more what we have; missing things that are still here: seagulls circling endlessly above the fishing port; waves moving relentlessly towards the shore; the immobile islands in the near distance; the sunset. (Yes, and even the damn camels!)

One of the keys to staying in one place for weeks or months at a time is to get connected to local events and to meet the local people (although for us the “local people” will most likely be ex-pats!). Aside from Diane, a Brit who has been living in Essaouria part-time for a dozen or more years, Paula has also found the Essaouria ex-pat Face Book page (I’m no fan of FB, but it does appear to have its uses). And that lead to the Sunday beach cleanup.

My first time at the weekly cleanup the wind was blowing like stink. After collecting more sand in my eyes than trash in my bag I headed home. The next week, though, the wind behaved (it blows every afternoon and has made Essaouria a haven for windsurfers, and now wind kiters, but in the morning? How rude!). The three of us—Paula, me, and Lew, the Canadian ex-ship captain staying upstairs from us—showed up, picked up our collection bags and gloves, and got a lift down the beach to the river mouth. It was fertile ground for trash collection! We were working with a half-dozen others, and in a couple of hours we filled a trailer with our trash bags. It was quite satisfying.

Lew chose to head home; Paula and I hiked along the river for a mile or so to the small town of Diabat, a bedroom community for Essaouria.

Diabat has created a reputation for itself with not one but two guesthouses/cafes named after Jimi Hendrix, who passed through this area in 1969. (In reality, Jimi spent two or three nights at an upscale hotel just outside the Essaouria medina. He came with his girlfriend, but not his guitar, although there are still places in the medina trading on the “Jimi Hendrix played here!” legend.) Aside from the brightly-painted Jimi Hendrix Café, Diabat is a bit drab. We’d been through here a couple of years ago on one of the hikes organized by Diane, and knew there wasn’t much up the road. We didn’t get very far into the town before returning to the more popular beach cafes of Essaouria.

Along the riverbed, though, we came across what appears to have once been a palace, now in ruin and filled with drifting sand. It’s a place that speaks of wealth and power, now lost and buried.

“Nothing beside remains. Round the decay
Of that colossal wreck, boundless and bare,
The lone and level sands stretch far away."
—Ozymandias, Percy Shelley, 1818

Some like to think this ruin was the genesis for the Jimi Hendrix song “Castles Made of Sand,” but the song was released two years before Hendrix visited the area. It’s a nice story, though!

We don’t have a car here in Essaouria. We rely primarily on what my mother called “shanks mare”: walking. But there is another option, here in this small coastal town: small blue taxis are everywhere. And, we’ve learned that the fare is always the same, 7
dirham, about 70 cents US. (Outside the city limits the rate goes up.) We use a taxi once or twice a week.

But there is another option: horse-drawn carriages. Unlike the elegant polished and painted carriages used to carry well-heeled tourists around Seville, however, these are much more… ah, rural in character. And much cheaper. Two dirham, I’m told, will take you from one end of town to the other. But only on a fixed route, along the large road that runs through the center of Essaouria. The locals use these carriages quite heavily; there are always two or three of them in sight, and sometimes a dozen or more.  But always carrying locals; I’ve never seen a tourist in one. A little too cross-cultural, perhaps… 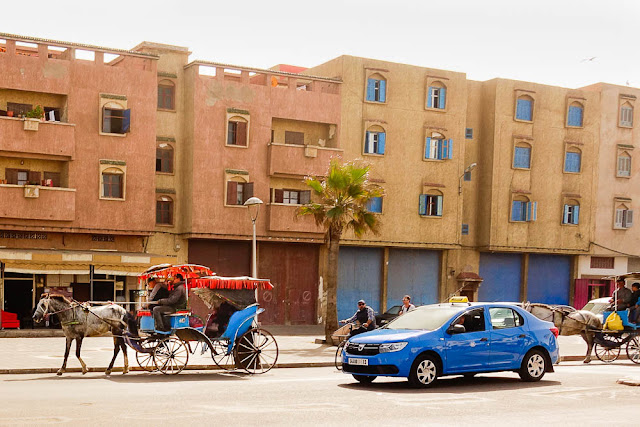 We can’t leave Essaouria without acknowledging mint tea. Well, it’s a thing all over Morocco, but we’ve started indulging in it here. Partially, it’s our terrace; only in the last week or so has the temperature warmed to the point where we use it regularly. And what’s better than sipping mint tea on the terrace while watching the waves? Fresh mint is abundant here; bunches of mint, picked every morning, are sold throughout town. Going price is 1 dirham (10 cents!). And every Moroccan household has a tea set. Now we spend an hour or so in the afternoon, sipping tea and relaxing.

One of our favorite travel bloggers, Frank, was in Essaouria recently. For a different take on this town, look a his blog here:
https://bbqboy.net/a-visit-to-the-unesco-beach-town-of-essaouira-morocco/