Fuzzed Out by Fez

We were very excited to return to the Fez medina (the old town). Two years ago we’d spent two months living in a restored riad(traditional house) in the medina, following the complex, winding streets and meeting the vendors and other residents of this ancient and unique city. Would we be remembered? Well, we hoped so.

Now we’ve returned, and it has been incredibly heart-opening and satisfying to find how well we are remembered. I’m stunned. The other day we hiked the 20 or 30 minutes down through the twisting, crowded streets to a café near the river. As we sat drinking our café au lait a fellow from across the street ran up and said “Hey, Paul! Remember me?!” Yeah, I did. We’d had a couple of conversations two years ago. He sold lamps and bowls to tourists, and was still at it now. And he remembered my name! I was pleased, and humbled.

Closer to home (which is to say, where we stayed for our previous two months) we had met and often talked with some of the shopkeepers who spent most of their day sitting, and talking to customers. They greeted us so warmly I was almost embarrassed. It was like we were family. In fact, several mentioned that we were family. What an incredible experience!

And then there is Kevin, our current host and new friend. A (former) Brit, he’s been living in Fez for a dozen years or more, and knows everybody on the street. Walking with him is to be constantly interrupted by greetings: a handshake, a hug, even just a wave (all of which then entail a conversation). Through him I’ve come to see the Fassi (people from Fez) as truly open and warm.

After a week of reacquainting ourselves with the city and its residents, our daughter Nina came for a visit. She too was fascinated by the ancient sights and colorful, crowded scenes. And she, too, learned to relieve the intensity of the city the way the Fassi do: escape to the roof.

As described in our blog posting from our first visit to Fez, buildings in the ancient median have few (or no!) windows, but all have a roof-top terrace. Kevin had fixed his up quite nicely, with a large hammock and spots for sitting and relaxing. And, in the afternoon, he’d bring up the cage with his two budgies (parakeet-like birds). They liked the shaded sun and fresh air; we enjoyed their songs and bright movements. We spent many pleasant hours looking over the rooftops of Fez and the adjacent hills.

Having spent two months living in the medina two years ago, we consider ourselves to be old medina hands: we know our way around, can find where we want to go, and now… hey, people recognize us on the street! So we are willing to try some explorations that newcomers would be ill-advised to do. Or, so we like to think…

With our daughter Nina we took a long and rather ambitious exploration, finally ending at the river, which marks the bottom of the valley in which Fez was built. We continued to the near-by Bab R’cif, the gate at the southern end of the medina (Bab means gate). While we stayed in this area on our brief visit five years ago, we’ve hardly visited since. But we’re old medina hands! (It says so in the previous paragraph!) We’ll just head up these alleyways and dead-reckon our way to The Ruined Garden, a pleasant up-scale restaurant near the tourist areas of the medina.

Ah, no. Endless short streets with sharp right turns, splitting into two or three passages in random directions. Narrow—I couldn’t lie fully across the way (not that I’d want to!)—with tall walls on either side, so the sky is a thin slit. Except… sometimes the houses are built out over the road, and we feel like spelunkers wending our subterranean way (through an admirably smooth and level cave!) Ancient timbers show through the stone, with huge beams bracing the walls. It’s quite medieval. (But clean! Today there’s indoor plumbing—no chamber pots being emptied on our heads—and electricity; every night the garbage is collected from the streets. But still, dark and a bit freaky.)

These are residential streets. No open shop fronts displaying colorful wares. Just confusing, similar-looking gray and brown alleyways. People live here, it’s a neighborhood, with kids (always teen-age boys) hanging out. And they’re always very helpful, although it’s easy to misinterpret intentions. “Medina is this way!” they shout. But we’re not going to the medina. “Tanneries over here!” No, we won’t fall for that scam! (Although the tanneries really are over there, and the guy’s just being helpful; he’s hanging out with his buddies and has no intention of accompanying us.) Or “It’s closed!” Their version of a dead-end. Who to believe? And our normally trusty Maps.me app has no idea where we are or which way to go. 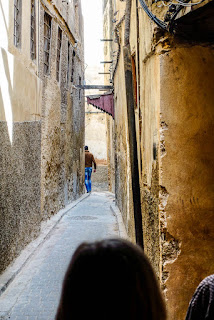 We meet up with a Chinese couple. Strength in numbers, we figure, so the five of us press on, amid the amused looks and shouted encouragement of the locals. The couple is actually quite frightened; it’s their first time in this confusing place and they feel targeted. We’re all a bit confused by the shouted directions, no matter how well intentioned. And every story we’ve ever heard about tourists being ripped off comes to the fore.

Eventually we reach the restaurant, now our oasis, and gratefully escape the streets with help of one young man. He does demand money though, which we refuse to pay. I invite the Chinese couple to join us, and we are seated at a table. Ah, sanity! The young woman, who was really scared, peers out the door and claims “he’s still out there!” Eventually, I go check—no, it’s somebody else. (I think...)

Last time in Fez we discovered the Photo Club and went on several interesting outings with them. We reconnected with the club and had time for only one meeting, but it was a good one: finding opportunities for portraits as we cruised through the medina. Omar, our guide, grew up in Fez and is thoroughly familiar with the medina, so I had full trust as we followed him into some out-of-the-way places.

We visited familiar streets and places I’d never been; jumped from one well-known spot to another through back passageways that left my head spinning. We ended at Place Seffarine, where artisans and craftsmen have been beating great sheets of bronze and copper into useful pots and bowls for centuries, and Omar gave us our instructions: take photos of people and meet back here in 30 minutes!

I headed for the river, with its familiar café, right around the corner. They were glad to see me again, and I was glad to sit and rest for a bit. Ah, but a smoker was bothering me; I captured his image and silently thanked him for his unwitting contribution to my portfolio.

I was soon joined by two other members of our outing, French women teaching in Fez. We chatted, sipped our coffee, and watched the endless parade of interesting characters. And I got a few more good shots, too!

It’s been a week since we left Fez, and I find I have mixed feelings. The warmth and joy of being greeted by those we’d met previously began, mysteriously, to feel like a responsibility, a social burden. The bright shops full of color and life, the welcoming vendors, began to feel repetitive; the narrow dark alleyways no long sources of adventure, but rather just tiresome. Were we getting some kind of Fez burnout?

So a week later I’m still wondering at the transition. How did the delight and wonder of being welcomed turn into obligation? How did the liveliness and mystery of the medina become boring and tedious? If we went back, which would we feel, the joy of reconnection or the tedium of unchanging sameness? Would we, in fact, go back?

I don’t know. To all the above, I don’t know. Maybe in another two years. Maybe never. But we will always cherish the experiences we’ve had in Fez; the magic and mystery, the connections, the friendliness shown to us. That will remain, where ever we go next.

Ah! Now that we're done with Fez, we can start in on our new adventures in Antalya, on Turkey's southern coast. Stay tuned!