Chasing Tulips and Windmills in Holland


What have we been up to lately? Well, among other things, we we went to Holland. We went expecting to see field after field of tulips, stretching to the horizon with colorful flowers. What we found wasn’t quite that extreme, but was still quite spectacular. Tulips, and windmills. We learned more than I expected about both of them. 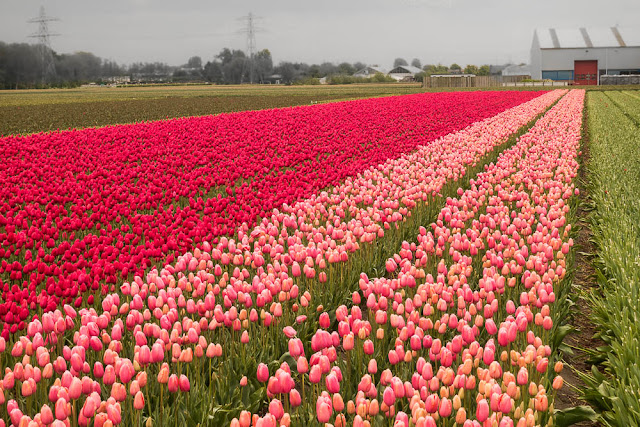 First, the flowers. It turns out those flowers aren’t grown merely as a tourist attraction. They’re actually grown to make money for the farmers. Imagine that! And most of the money is not made selling the blooms, but rather the bulbs, so that someone else can have the joy of growing these extraordinary flowers. But healthy blooms detract from healthy bulbs, so the flowers are cut to allow the bulbs to grow. Each plant will have maybe three or four bulbs, which are harvested in the fall. This year, the year we visited, there was some very fine warm weather early in the spring, causing the flowers to pop out, resulting in an early cutting. What we saw were vast fields of flower stems. Awesome, but not quite what we were hoping for!


We chose not to go to Keukenhof, The large garden park that IS just for tourists. The photos look fabulous, but crowds numbered in the 10,000s deterred us. Instead, we drove along the very narrow roads giving access to the fields, and we visited one farm with a demonstration garden. I never would have imagined there were so many types of tulips! And many with delightfully imaginative names.

We stayed at an Airbnb apartment in a rather nondescript building on the outskirts of Leiden. (The Netherlands* is small enough that it doesn’t really matter where it is, it’s close to everything). We found Leiden a totally charming town. We were in Amsterdam last summer, and while it too is charming, it’s also crowded, expensive, and, during our visit, hot (ok, so that doesn’t happen much!). Overall, a mixed experience.

* To clear up a misunderstanding I had: the name of the country is The Netherlands, which means, essentially, the Low Countries. Holland is in the western part of the country: the provinces of North Holland and South Holland can properly be called Holland; since we spent our time in these provinces I feel OK about using Holland as a designator for where we were. Glad I got THAT cleaned up…

The canals in Leiden were every bit as charming as those in Amsterdam (although there are fewer of them!), the cafes just as refreshing, the people no less friendly, and the bicycle culture also amazing. But perhaps having less of everything helped us appreciate it more (particularly when trying to avoid getting run over by the bicycles!).


Another place we didn’t go was Kinderdijk, the windmill museum. Apparently it has a collection of windmills with extensive demonstrations and explanations. Instead we drove around and found three mills in a field, very picturesque! It’s what we came for, why look further? Actually, to get a better understanding of how the mills were constructed and used, we walked across Leiden to the Museum De Valk, a re-built windmill open to the public for a modest fee (5€, I think). There we saw a brief video on windmills in the Netherlands, where I learned that these mills were essentially Holland’s entry into the Industrial Revolution. Originally used to pump water to drain fields (polder mills), they were also used to grind grain and eventually became prime movers for a number of industrial processes. The rapid development of the steam engine, though, quickly replaced windmills for many applications.

The ground floor of the multi-story Museum De Valk mill consisted of a house for the miller, also restored and available to visit. The life of a miller was not an easy one. In addition to lugging the heavy bags of grain and flour, and overseeing the grinding operation (which included removing and dressing the heavy stone grinding wheels every couple of weeks), the miller had to watch the wind and constantly orient and adjust the sails. (Electric motors are SO much easier…). I must admit, being on the top floor of that very high mill and watching the sails turning and those big wooden gears spinning made me glad I could just leave at any time! Being up there in a storm would have been no fun at all…

What else has been happening? We've been living in our classic apartment in Montpellier, visiting with the people we’ve met here; viewing apartments in town as potential rentals when we return; and certainly enjoying what the city of Montpellier has to offer. Oh, and preparing for our canal boat trip, long in the planning, that’s coming up next week.

Our time here in Montpellier draws to a close, and we are very sorry to go. Although admittedly, we've been too busy getting ready for our canal trip, and the arrival of Paula's brother and sister-in-law, to be feel sad. We've still got a month in France, and we will make the most of it!