Wait… Has it been that long?


Wow, we’re on the ferry, crossing the Great Water (or perhaps it’s the Narrow Sea – not that far from France to England). In any event, we’ve left France and will be in England in a few hours.


We’ve spent the last two weeks traveling, staying only a couple of nights in each place. It seems the experiences have been coming so fast we have hardly had time to process them, let alone write about them! No hope of catching up now, but here are some highlights, in no particular order.


Let’s see if we can start at the beginning. First stop after Montpellier was the fabulous city of Bordeaux, known for its wines. And for its architecture (reportedly, when Paris was being rebuilt in the 19th Century, it borrowed heavily from the architecture of Bordeaux).


We had a great Airbnb host, a young English-speaking professional who took us  into the city and showed us around. We saw the magnificent palace along the river, and the truly incredible “water mirror fountain.” During the day this large, flat area is flooded to an inch or so deep, with water bubbling continuously and kids young and old splashing around. As the sky darkens, though, and the lights of the palace just across the street come on (about 10 o’clock in the summer!), the bubbling stops and the surface flattens. The lights of the palace reflect in the flat, still water. Then, the mist  comes on, making the whole scene otherworldly.

And a short video:


Now we are in Brittany, the upper left hand corner of France. We’ve never been here before, and it is quite striking. Brittany is one of the more “independent” regions of France, keeping to itself and holding fiercely to its own traditions and history. (It has the distinction of sharing the Celtic tradition with Ireland, Scotland, Wales, and a few other areas.) And the people cling to their own language. In fact, the French army had a bit of a problem during WWI when they found the recruits from Brittany did not speak French, only Breton. (That did not go well for the Breton men. According to one memorial we saw –and every town in France has a memorial to the World Wars – 240,000 Britons died in WW1.)


It’s all very much more French now, but the people are still proud of their traditions; the black-and-white striped Breton flag is seen everywhere. (And the blue-and-white stripes seen all over France? Started here, very prevalent here.) Houses – and churches! – are distinctly different here, with their steep slate roofs. And, water is never far, several rivers cross the area. And then there’s the Atlantic Ocean, so much different, somehow, from the more placid Mediterranean Sea near Montpellier.


The cuisine is distinctive. Crêperies are everywhere, serving sweet (dessert) and savory (full-meal!) crepes. Cider is also very prevalent. Normandy may be the cider capitol of France, but Brittany is right up there, too. And then there’s kir. Add a bit of dark red cassis liquor to a delicate white wine, or a fine Breton cidre, and you have a luscious, refreshing aperitif. Our new favorite!


We got an early lesson in both crepes and kir, as our first Airbnb hosts were true Bretons, living not far from where their grandparents grew up. The lady of the house demonstrated her crepe making technique (I’ve got a video!), while her husband shared his home-made cider with us. (And yes, their 1980’s house had a steep slate roof!)

There are megalithic sites that are world-renowned: Stonehenge, of course; New Grange in Ireland; standing stones seen elsewhere in England and Ireland. But there are more such sites in Britany than anywhere else in the world (who knew?). We were on a (minor) quest to find ancient stones, and were well-rewarded. At Carnac, in the south near the Gulf of Morbihan, are huge fields of aligned stones, hundreds of them. Lost in the woods, or inaccessible in the middle of a farmer’s field, are more stones and structures. No one knows what purpose they served, or how they were erected, but typically they are around 6500 years old.
Most impressive for us were the stones at Montneuf; some 400 stones were found lying on the ground; 39 have been erected in their original positions. The rest have been left for future archeologists. This was not the most extensive field of menhirs, but seems to us to be the most sincere, as it were: the fields at Carnac were swarming with people, while we were mostly alone in the woods at Montneuf.

Mont St Michel
Truly a classic, this one needs no introduction. Tides in this area, in the north of Brittany, are extreme (regular tidal range is 20 meters, 66 feet), with Spring tides even more extreme. And the land in this area is very flat, so a 20 meter change in elevation covers a lot of area! We arrived at low tide, with the ocean barely visible in the very far distance and the rock high and dry. We left six hours later at high tide, with the water lapping at the stone port entryway. We almost got our feet wet!

We took the night time tour of the abbey, at the very top of the island. The stone work, the structure, the maze-like rooms made it mind-boggling in itself, but there was an added “feature”: certain of the rooms had been augmented with a sort of sound and light show that made the whole thing strange, weird, and wonderful. And, the sun was setting at 9:30PM, and the tide was coming in.


A little time-lapse video I shot with my iPhone; real time was 10 minutes or so


It all made for an incredible experience, one for which we’re both very very glad. Although I must add that arriving at the car after riding the bus back from the “event” put me in mind of our trips to Disneyland in Anaheim, California when I was a kid: we could see it – the Matterhorn – from a long ways off, there were crowds of people, parking fees were exorbitant, we took a shuttle to the entry gates. And then, after it was all over and we were back at the car thoroughly exhausted, we could see the place in the distance, and felt entirely full and satisfied.


Tidal changes
As a kid I saw photos in books of boats left high and dry from the tide changes in this part of the world. Now I’ve seen it in person! It’s quite remarkable, completely natural yet as outside our everyday experience as the standing stones at Carnac. I hope someday to be able to sit for six hours and watch the tide come completely in.

One practical application of this extraordinary natural event is the generating station on the Rance River. A dam near the mouth of the river blocks the tide, coming and/or going, building a head of water that is allowed to flow through turbines, spinning generators to supplement the many nuclear power plants in France. In operation since 1962, it is the first of only two in the world.


Brittany houses
One of the most noticeable regional characteristics in Brittany is the houses, distinct from the rest of France. New and old, the roofs are very steep and always done in ardoise, slate. We stayed in one house that was only four years old; the roof was covered by even, well-cut, 3-4” slate “scales.” Following in a long tradition!


And here's a couple of modern houses, also with steep slate roofs, from a Real Estate web site: 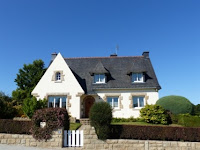 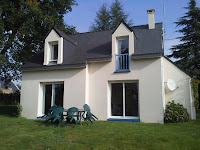 
A medieval city (like so many in Europe), this one with a huge, well-preserved castle. We climbed the 138 steps to the top of the town's church steeple to get a good overview of the town. And on the hills in the distance, modern wind turbines churning out electricity!


Next up: something about England, I suppose!
Posted by Paul at 02:15