Boots of Spanish Leather or These Boots are Made for Walkin’

Yes, after seven months and some 700 miles of sole abuse our shoes need replacing. In the meantime, we’ve learned some things about what makes for adequate footwear here in Europe. For one thing, roads are rarely smooth. They are often paved with cobblestones, first introduced by the Romans (ok, I’m not at all sure if that’s true, but the Romans started pretty much everything having to do with cities and roads, so why not that, too?). And let’s face it, while cobbles are romantic, ancient and all that, they are not particularly comfortable to walk on (or ride on, or drive on…). So, shoes for cobble walking must be sturdy!

We want thick, solid soles. We also want light weight, and flexibility. And, of course, “un poco de gracia” (while we’re on the theme of oldies): a little grace, a little style.  The shoes here (in Seville, and probably Spain in general) have more than a little grace and style. And, shoes here are certainly available in abundance. Today Paula took me to the shoe store street, a few blocks where every other store is dedicated to shoes. Along the way we passed many other shoe stores. It seems the Spanish must really like shoes, and buy them often, to support this plethora of stores!

While Italy is renowned (oh, I originally wrote renounced; well, maybe that, too) for its shoes, the image that comes to my mind are pointy, stylish but not necessarily comfortable shoes, with thin leather soles, perfect for the thick carpets of, say, a high-end law firm such as Bendini, Lambert and Locke1. But we need something for the mean streets of Seville. And Spain has long been known for its leather. We find shoes with soft, supple uppers, in both classic and high-fashion styles. Some also have soft, supple soles. Uh oh, I already have some shoes with soft supple soles, and they are NOT good for cobble walking! I need something light, supple, and thick. And given all the stores, it doesn’t take long to find ‘em.

1OK, that's the law firm Mitchell "Mitch" McDere worked for in "The Firm", John Grisham's 1991 novel that was later made into a film starring Tom Cruise and Gene Hackman. And didn't you already know that?

Later, on the way home, we stumble on what I take to be the city’s crèche, its Nativity display. Only this crèche fills an entire building! It is, in fact, a diorama that seems to cover all of Palestine, showing every aspect of life in year 0AD (or 1AD, depending on how you figure it). Inns, donkeys, bakeries with loaves of bread, vegetable gardens, blacksmiths, people coming and going. Private houses and public buildings. It was a marvel, and, for us, completely unexpected. 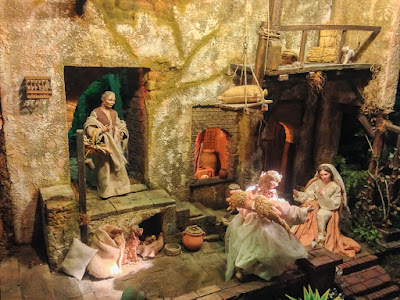 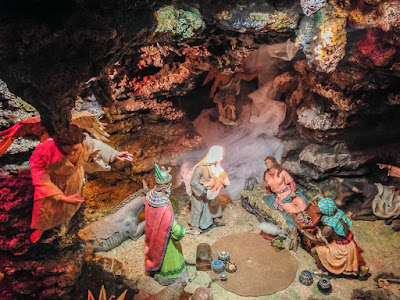 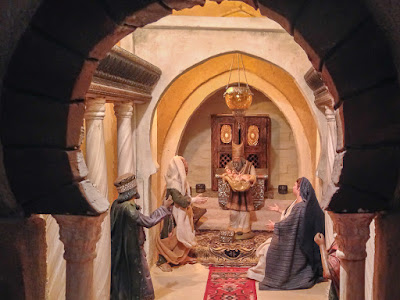 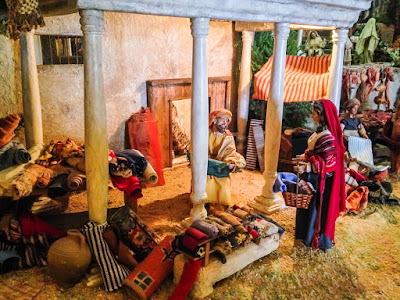 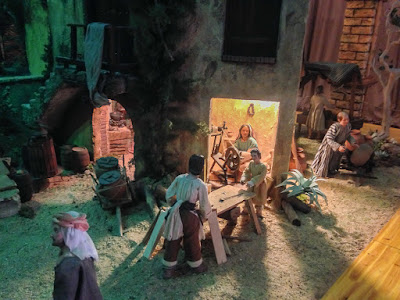 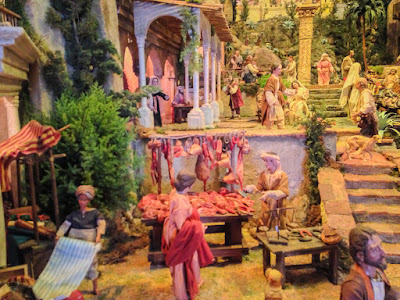 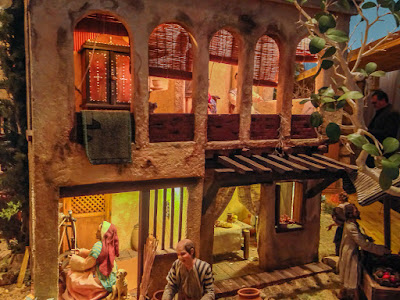 Now, these last two are different. they are full-size recreations of what the village where Jesus was born might have looked like...

All in all, quite extraordinary!

After seeing it I better understand the Christmas Market, a series of portable buildings around the Cathedral. They are completely devoted to miniature people, plants, animals, and scenes from the birth of Christ and the lands around. Some are highly detailed, very well done, and marvelous; others are whimsical and cartoon-like. Some are animated, with an arm going up and down that ends up being a carpenter hammering, or a farmer raking, or someone fishing with a pole, or women shaking out rugs. Little flickering bulbs make realistic fires in bread ovens or open hearths. Presumably the good citizens of Seville buy these figures, most 3 or 4 inches high, to create their own nativity scenes, no doubt augmenting them each holiday season (“Oh, let’s get some sheep this year, and maybe a donkey!”) But the town’s official Nativity scene is truly something to behold!


Later, in the evening, we go out again, me in my new stylish boots. We head to the store Paula has already identified, and after no more than the usual trying on, testing, checking, and deciding, we leave with Paula’s new boots in a bag.

We decide to swing by the cathedral, just to see what’s up. We had already noticed the streets were jammed, people everywhere, of all ages. Mom and Dad with the kids; young folks cruising; older folks hobbling. EVERYone was out and about! And we noted that some of the bars and cafes that always had patrons spilling into the streets were nearly empty this night; everyone was out promenading.

So what’s going on? Tomorrow (December 8th) is a major holiday, the Feast of the Immaculate Conception, a major even on the calendar of the Catholic Church, and one of the top three or four holidays in Spain. And, the city has turned on the Christmas lights! (Sorry, my camera is still broken, and the cell phone takes lousy night-time photos.) So the entire population is out, enjoying the warm evening, admiring the lights, cruising in and out of the many shops open (including all those shoe stores), and just gearing up for the holiday season.

We wandered over to the cathedral, marveling at the crowds and the relaxed intensity of the energy (does that phrase even make sense?). A couple of years ago we were in New York City around this time of year; last year we were in Paris. Here it’s different; the energy feels mellow, embracing, not frantic or hard-edged. The cathedral is open; normally there is an entry fee. Tomorrow evening there will be a special High Mass for the faithful; it is sure to be well attended. Tonight most areas inside the Cathedral are blocked off as preparations continue for tomorrow, but the cathedral really is huge, so there is still lots of floor space to cover.

Eventually we’ve had our fill of indoor strolling, of admiring the huge carvings, the massive pillars, the ceiling so far above us I expect rain clouds to gather. Besides, my new boots are not yet broken in, and Paula has not had time to admire her new boots. Time to head home along the brightly lit, packed streets and prepare for tomorrow evening’s ceremonies.

Ha! You thought I forgot! Yes, here's photos of the new boots.... 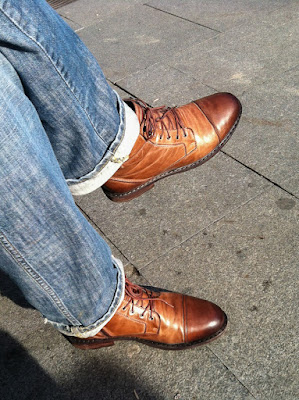 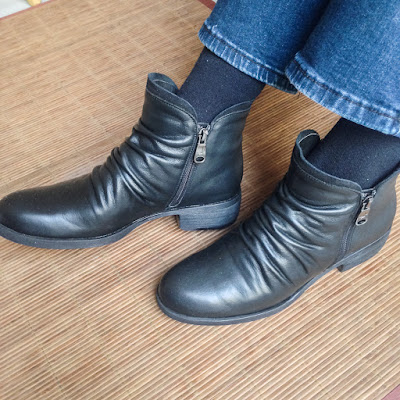