One opportunity we want to take advantage of while here in Europe is the easier travel times and distances. California to Rome, Italy is a long, expensive trip. Seville to Rome, on the other hand, is a 2-1/2 hour flight...

(All the photos here were taken with an iPhone 5C; still no real camera!)

A funny thing happened on our way to the Forum; we ended up at a Pink Floyd concert!  Well, it wasn't actually Pink Floyd, and it wasn't really a concert. And for that matter we were going to the Trevi Fountain, not the Forum. But we were in Rome…

When we were in Paris a year ago we realized that what really interested us was not so much the famous sights as the interactions we had with people, the amazing contacts and events that seemed to form: Moments, we called them, not Monuments.  For this trip to Rome, though, we figured we focus on the monuments. I mean, there are so many of them! And they’re so famous! Ah, but it seems that moments kept finding us!

As we wound our way through the crowded, narrow streets fending off the usual beggars, vendors, and touts we came upon a large crowd in the street, and the strains of familiar music. Four guys – three guitarists and a drummer – had set up against a building (the music resonates very well on these narrow stone streets). We caught the end of a Pink Floyd number. The next song was “The Sultans of Swing” by Dire Straits. Close my eyes and it was Mark Knopfler before us... Amazing! Just amazing. A couple of young women in the crowd caught Paula's eye. That’s music from our youth! Paula told them. To which they responded: For us, too! (even though their “youth” was a few decades after ours!)

Then the band was done, much to our dismay and that of the large crowd that had gathered. They told us they would be back the next night, same time, same place. (Apparently, there’s some kind of schedule for street musicians.).

We moved on, heading for the fountain. The thing about Rome is that something is happening around every corner – and sometimes in the middle of the street. Everywhere you look there's a monumental building or an ancient column or an old church. Or an impromptu concert.

We began to hear the sounds of water flowing, water falling. The piazza opens up before us, and there is the crowd, moving, smiling, sitting, enjoying. And past them, now clean and white and very well lit, is Il Fontana di Trevi, the Trevi Fountain.

Famed in movies (such as “La Dolce Vita”, which we watched as part of our pre-Rome research), it is one of the best known of Rome's many attractions; where Anita Ekberg plunges into the water in an evening gown, enticing Marcello Mastroianni, somewhat more reluctantly, to join her. Of course, neither Anita nor Marcello was there that night, just a massive crowd, kids running around, flashes going off, selfie sticks waving (half of them being held by vendors, hoping for a sale). But worth it. Totally worth it!

We made the 20-minute walk every night to look at it. Quite apart from the social scene – the hundreds of people hanging out, taking photos, running around – the fountain itself is, ah… surreal? Hardly begins to describe it. Oceanus (Mr. Ocean), a heroic figure in classic Greek style, stands in his sea shell chariot pulled by two winged horses, surfing across the waters of the world while tons of actual water flow out in great profusion across rocks and sculpted exotic plants, finally merging in a broad pool (now littered with coins that people insist on tossing in – yes, we did too!). It’s just a mind bender taking it in, and trying to understand what were they thinking, the “they” that designed and built this thing? How can such a thing even be conceived? And, where else but Rome would a sculpture like this even have a context?

Night after night we came back, to stand in awe and wonder. It wasn’t until our last day that we actually had time to see it in the day. (Nighttime is better. Definitely better!) But, video works better with more light, so check this out:

Our other favorite fountain, closer to “home,” was the Four Rivers Fountain (Fontana dei Quattro Fiumi) . More compact, less expansive, but no less expressive, and more nuanced, more detailed. Four giant figures, each finely detailed and exquisitely carved, represent major rivers on each of the four continents on which the pope (Innocent X, who sponsored the fountain) had influence: Europe, Asia, Africa, and the Americas.

It’s another mind bender! We stopped by there coming and going each day, again to marvel at the designs, the workmanship, the mindset that could conceive of such a thing… and of course at the ego that would actually build it!

Then one night shortly after sunset (“one night:” sunset was at 4:30!), probably after the “Crazy Diamond” event (referring here to the song by Pink Floyd – keep reading), we came upon Quattro Fiumi in the dusk, with its central obelisk outlined by the darkening sky. The obelisk fit neatly between the dome and towers of the church Sant'Agnese right behind it. It made for a striking, almost heart-stopping presence. It’s an image I’ll carry with me for a long time.

A Funny Thing Happened on Our Way Back From the Forum

So this time we really did go to the Roman Forum, and the Colosseum, too.  We immersed ourselves in the glory that was Rome, and were blown away by what we found. Just the tiny remnants – the massive tiny remnants – are astonishing, and worked our imaginations. We came back exhausted. Not as badly, though, as we had the day before after visiting the Vatican Museum. (Although the Vatican Museum fatigue had an additional, emotional component: all that enormous talent, all those extremely rare and expensive goods created and collected by and for a few excessively rich and conceited men; first, the Roman Emperors, and later the 15th &16th century popes. Hard to grasp that kind of ego!)

Then there was the walk home through constant crowds spilling over the narrow sidewalks into the streets. And the beggars and the selfie stick salesmen and the tour guides. Fatiguing!

Here's some things we saw on our way to the Forum...


Yet we were fresh from immersing ourselves in what Rome 2000 years ago might (or might not!) have been like: walking down the Via Sacra (the main street of the Forum) probably bore some similarity to our walk back along the Via dei Fori Imperiali (that’s the modern highway running next to the valley of the ancient Forum, leading to the Colosseum, and prominent in the video). It was crowded with people about their business, with no end of entertainers, vendors, and artists (both legit and con artists!) Oh, and tourists! (Just like the ancient Forum, I'm sure.)

Here's a quick video highlighting our arrival from the hill overlooking the Forum, and our walk towards the Colosseum:

And here's some monuments among the monuments, photos from our visit to the ancient Roman Forum. These were all taken right as the sun was setting. Gotta love that golden sunlight! 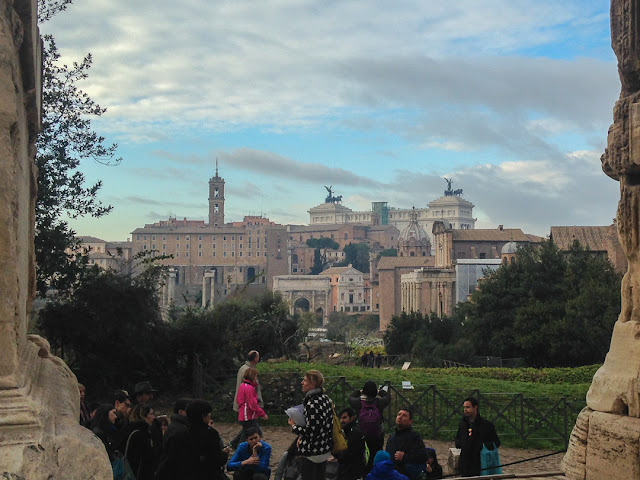 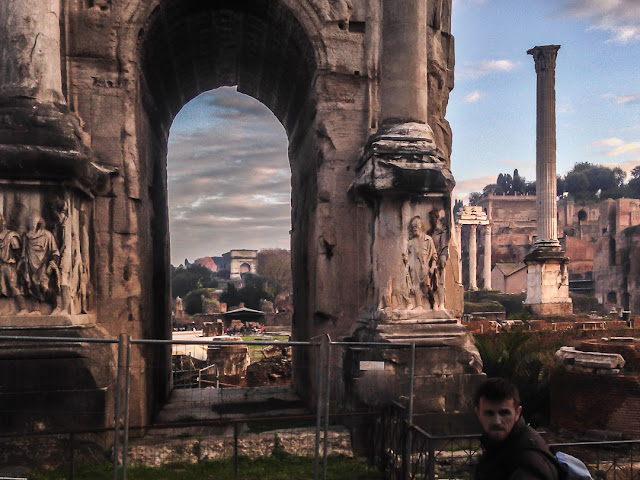 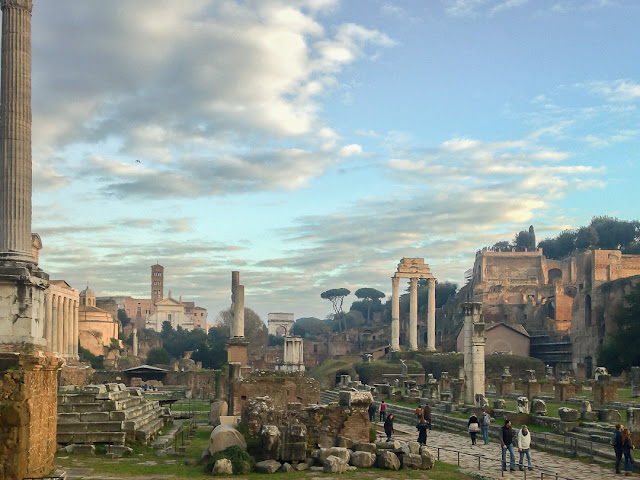 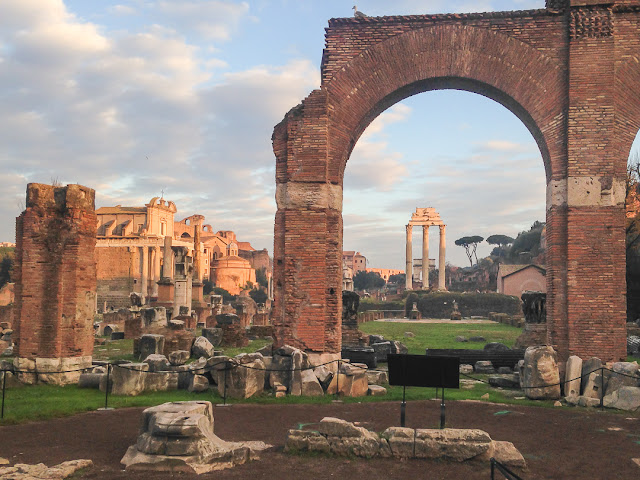 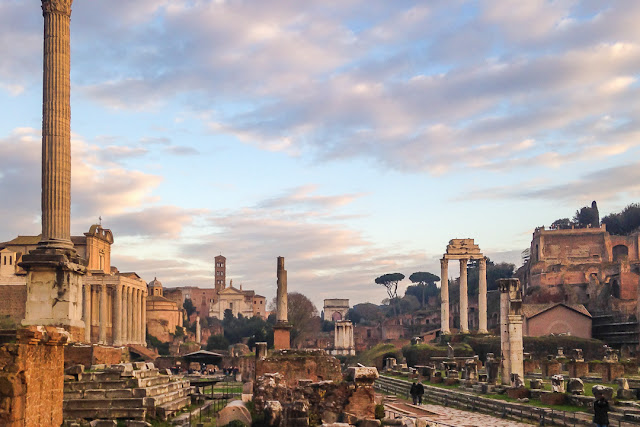 We come around yet another corner and there, in the middle of the piazza, surrounded by enthralled observers, is Andrea Bocelli. No, wait – this guy can see. Must be Enrico Caruso. Whomever, he has a hell of a voice! We arrive at the last two minutes of his last aria, and he holds that final note so long I forget to breath and almost pass out. Whew! He thanks the crowd, makes a joke about his house just behind him (actually it's the Pantheon, a massive building from sometime around the zeroth century with the world’s first dome).

Mr. Opera picks up his portable music player (he doesn’t need much, with that massive amplifier in his chest!) and introduces the next act, who turns out to be our buddy Mr.  Pink Floyd from the previous two nights. But tonight, Sunday, it's much earlier, just after sunset (around 5 PM) and getting dark. He doesn't have his band, but launches into a solo version of “Shine On You Crazy Diamond,” with the exact musical look and feel of Mr. David Gilmour. The notes, each one sharp, distinct, piercing, resonate and reflect off the high massive stone buildings, taking on an ethereal, haunting quality. The history of the music, our own histories with this music, seems somehow to be mirrored and reflected in the history of this place, in these ancient buildings of Rome.

We listen for a time, hanging on every note. But it is essentially a low-key song and our fatigue and sore feet finally win out, and so we reluctantly trudge home with Pink Floyd fading in the background. Another Moment among the Monuments.

It was a quick trip, really, just a long weekend, then arrivedercci Roma! But we'll be back. After all, we threw the coins in the fountain, and that guarantees a return!

next up... probably something about Christmas in Sevilla